Maurizia Cacciatori, or “Mauri” as her fans call her, was born in April 6, 1973 in Carrara, Tuscany, Italy. Cacciatori truly carries the meaning of her surname; namely, “hunters”. She was a true leader back in 1990’s with her exceptional play, fighting spirit and confidence on the court. 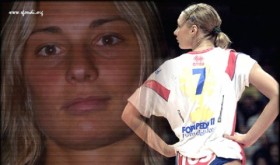 She started playing volleyball in Pallavolo Carrarese when she was 13 years old. After spending two seasons in A2, her play caught the attention of Italian volleyball mentors and Perugia added her to their squad only when she was 16 years old. At 1.78 cm, she was creating wonders as a setter.

Her national senior team debut came in 1991 in a match against Russia.

In 1992, she won her first trophy with Perugia in the Italian Cup.

Then her biggest feats came when she started to play for Foppapedretti Bergamo in 1996. In her first year at Bergamo, she had Keba Phipps, talented American hitter, in the roster. That year saw them winning Super Cup, the Italian Cup and the Italian Championship.

Next year, they were the victorious sides on the same three fronts again adding the European Cup of Champions trophy under their belt. As of then, Mauri was viewed as one of the best setters in Europe coming into 1998 National World Championships. Mauri had a great season leading before the Championships winning the Italian Cup and League once more in 1998.

In 1998 World Championships, Italy’s losses to Cuba led by Torres and Aguero, Crotia starring Barbara Jelic Ruzic and China caused them to fall off the podium and finished as the 5th. However, Cacciatori was the consolation element for her team winning the Best Setter award collecting $50,000.

Besides her fast and accurate play, her beauty covered the world volleyball headlines at the end of 1990’s. Although Piccinini started to debut in the national team during those times, it was Mauri rather than Francy who was the major center of attention by the worldwide press. She took place in Nike’s and other lingerine adverts which received mixed feedbacks. Comments flooded likening her to tennis’ Anna Kournikova suggesting a disastrous end to her blistering play on the court. Yet, she remained silent and continued her fruitful play on the court. She was mostly famous her discipline and fighting attitude which was mirrored in her 7-hour gym workout routine.

Italy, as the host of 1999 European Volleyball Championship, was hopeful to lift the title in front of their audience. Yet, their dreams were shattered by Barbara Jelic and Co. in the semis and they had to be content with lifting the bronze medal by beating Germany in straights.

Italy got a wild card for the World Cup; however, they only managed to finish the 7th sending SOS signals before the Sydney Olympics. The signals turned out to be right as Italy managed to be only the 9th in the Olympics. Yeti Mauri was blamed following the tournament for losing her concentration due to intense fan interest as she was receiving 170 mails per day during the tournament.

Although Italy was not at their best, Mauri was finding success at club level. In 2000, Mauri won European Cup of Champions once more with Bergamo this time setting to the greatest elites of world volleyball along the road; namely, Mireya Luis, Gabriela Perez Del Solar, Simona Rinieri and Francesca Piccinini and coached by Marco Bonitta and Giovanni Caprara.In 2001 European Championships, Mauri shone together with Italy as they won the silver medal losing to Russia in five sets in the final.

The 2002-2003 season became the last season for Mauri in Italy after having won all the awards, playing with all the great players and training with the greatest coaches. For 2003-2004, she played for Tenerife together with Elena Godina beating a star-studded Perugia featured by Francia, Aguero, Metcalf, and Kirillova in the final to win the European Champions League title.
In 2003 she had a quick and short try in beach volleyball. Later in 2004 June, she played for the 228th and last time for her national team and totally retired from volleyball in 2007 at the age of 34 in Spain.

She is currently a sports commentator at Sky Sports and married a to a former Spanish basketball player and a mother to a son.

BRUTAL SPIKE: This move marks round of...