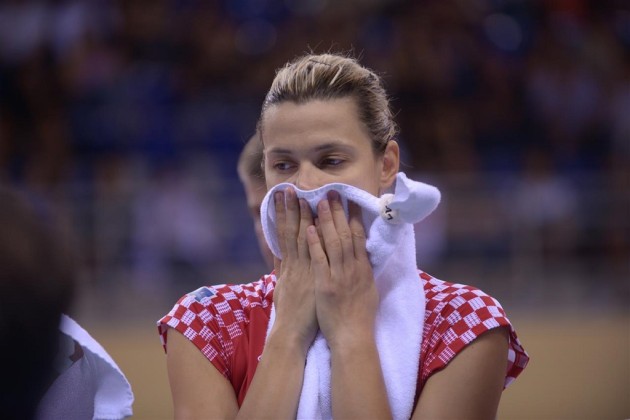 The 36-year old opposite from Zagreb, finished her brilliant career with the bronze medal, winning the third place in Japan, where she played for two seasons for the Saitama Ageo Medics.

In her career, Katarina has played for 12 clubs, starting from Mladost Zagreb, through Turkey, Italy, Romania, Azerbaijan and all the way to Japan.

Along with four Croatian “Superliga” titles in the Mladost’s jersey, she also won gold playing for Romanian Belor Galati and the Italian Novara, while she also won five national cups.

In the season 2006/2007, Katarina climbed to the top of the European volleyball, clinching the Champions League title with Zanetti Bergamo.

She also won the MVP award of the Italian Serie A1 and Italian Cup on three occasions, playing for Novara.

We give you Katarina Barun-Šušnjar’s farewell letter in its entirety:

“For the first time, after 23 seasons, I am not here to think about “the future under the net”, a new team, a new challenge, the next game to play.

After more than twenty years, the time has come for me to leave my knee pads in the closet and prepare to start a new life.

I was 14 when I first wore the Mladost Zagreb shirt, my first team.

I was 36 when a few months ago before the whole world devoted itself to a much more important and delicate challenge, I played the last game with my teammates from the Ageo Medics in Japan.

Between 12 clubs and 6 different leagues, 6 Championships, 5 National Cups and a Champions League title, I lived every day with the same passion and determination, strong feelings that followed me in the most beautiful and most difficult moments in my career.

I gave my whole self to this sport, which in return gave me a lot, many friendships, deep ties and beautiful victories that also formed me as a person outside the volleyball court.

I am grateful for all the people, who have accompanied me on this long journey and I hold the place in my heart for all of them.

FIVB M: Australia roar back to down...