After six days of intense action, Europe could finally determine its “contingent” for the 2013 FIVB Volleyball Women’s U20 and Men’s U21 World Champs that are scheduled for later this summer in the Czech Republic and Turkey. Estonia, Russia, France, Serbia qualified. 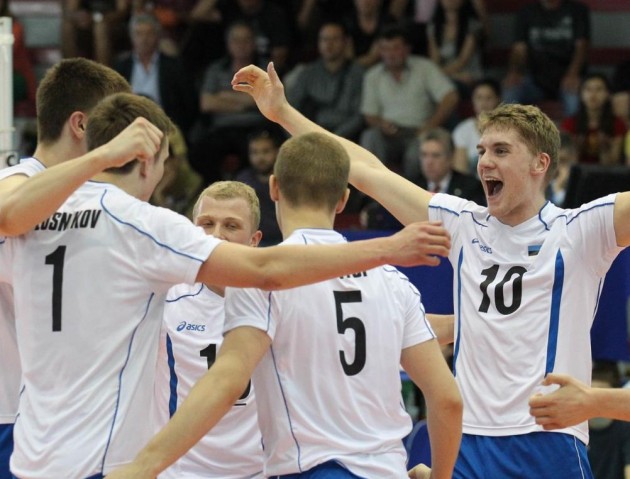 A total of eight qualification tournaments were held this week and by drawing the line there’s a trend to be observed, though with one – and quite significant – exception. All organizers could exploit their home advantage to qualify for the Worlds but Estonia’s men did not want to stick to that rule as they caused the real major sensation of the week by sweeping all of their games in Sofia to make it to the World Championship for the second time in their history after having done so in 1999.

Estonia edged the hosts of Bulgaria as well as Germany at “Hristo Botev” sports hall in Bulgaria’s capital city to finish atop of the charts in Pool C and join the winners of the other tournaments – Russia (Pool A), France (Pool B) and Serbia (Pool D) to fill in, alongside hosts of Turkey and 2012 European champions Italy, the six spots assigned to Europe for the Men’s U21 World Championship. The competition was very exciting up to the very end in Saint-Jean d’Illac and in Ivanjica where France and Serbia could use the advantage of playing before their fans to edge the bronze and silver medalists from last year’s European Championship, Belgium and Spain, in that race for making it to the Worlds.

As for the Women’s U20 World Championship, hosts Czech Republic and Turkey – winner of the 2012 European Championship – are set to be joined by Serbia, Italy, Bulgaria and Russia for the competition scheduled for late June in Brno and Prostejov. These teams all finished their campaign with an impeccable record thereby claiming the sole ticket at stake in each group for traveling to the Czech Republic. Italy will hence have the opportunity to try to retain there the title they claimed two years ago in Peru and go for back-to-back crowns to follow up on their bronze medal from last year’s European Championship in Ankara.