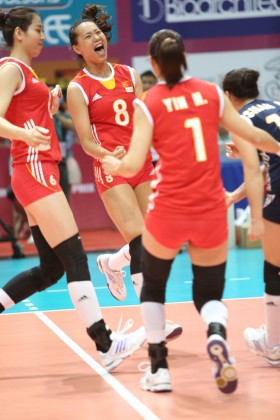 China’s Zeng Chunlei was the top scorer for her team, with 17 points, while Captain Havlickova Aneta led the Czech Republic women with 15 points.

From the start of the first set, China started strong and took a comfortable lead toward the first technical time out (TTO), 8-2. The Chinese women managed to pull ahead further, thanks to the solid spikes and tough blocks by the entire team. Claiming a large lead with aggressive hitting – especially from Captain Hui Ruoqi and Zeng Chunlei – the Czech Republic was forced to call for a time out at 20-11. China maintained their aggressiveness, however, and sealed the first set 25-14.

The second set started in a more competitive way, as the Czech women improved their defense and blocks, to tie the match at 6-6. But the united Chinese girls came back and forced the Czech Republic to call for a time out at 10-6. The Czech women managed to regain their rhythm and achieved four straight points (10-10) after the timeout. Both teams strived hard to gain a better position, yet the strong Chinese team gradually took control again to win the set 25-17.

China carried the momentum to the third and final set, forcing the Czech Republic to call for the first timeout at 5-1. Though China made a few serving errors, the Chinese women were still leading five points at the fist TTO. Czech tried to tighten the gap by applying more forceful attacks, especially by Czech Captain Aneta Havlickova, but the Chinese women matched their attacks with strong defense, gaining six consecutive points to 19-8. It was too late for Czech Republic to regain its position, and China seized the game set 25-13.

GP: Czech: ”Our side didn’t perform as well as we have planned”