GP: Czech: ”Our side didn’t perform as well as we have planned”

In their second match ever in the FIVB World Grand Prix, the women from the Czech Republic were unable to stand up to China’s experienced players and new coach Lang Ping. After a quick match Friday at the Hong Kong Coliseum, in which China won 3-0 (25-14, 25-17, 25-13), the coaches and players discussed the game. 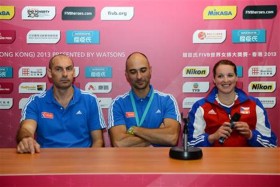 Czech Republic coach Carlo Parisi: “We played very badly as we didn’t start off with a good approach. We worried about lots of things when we played, such as China being very strong, the number of spectators and the expectation. We were focused on a lot of bad things and didn’t play in the right way. In the second set, we managed to stop thinking about the bad things. However, we started to lose focus again after losing two points.”

Czech captain Aneta Havlickova: “China was a strong team. Our side didn’t perform as well as we have planned. There were occasional better performances. Overall it was a good experience as we did learn from this match.”

China coach Lang Ping: “It was our first game against the Czech Republic so we didn’t have a clear understanding of our opponent. We focus on doing our best and avoid blaming each other’s errors. Also, we adapted well to changing circumstances in the game. Having said that, we travelled from Macau to Hong Kong, while the Czech team travelled longer distance and have to cope with the time difference. That may explain why we can quickly get into the game.”

“Wang Na has demonstrated consistent performance and has good grasp of the momentum of the game.”

“Although our team has won 10 matches in a row, we haven’t been thinking victory of the subsequent matches. We want to take every opportunity to train up our adaptation capability as well as coordination on court. We still have areas to work on and we hope to strive for continual improvement.”

“Yin Na has played with great intelligence. She has shown solid reception and defense and has good control of the game.”

China player Zhang Lei: “Our team got into the momentum very quickly. We had been proactive in scoring and the outcome was effective. We hope to continue with this satisfactory performance.”

To read more about this competition, click World Grand Prix.

Warm up with FluiBall (VIDEO)