Tunisia's outside hitter Nihel Ghoul is a kind of player who dedicated her life to volleyball professional life since she was a 10 years old child till she became European based in Le Havre Club in France. 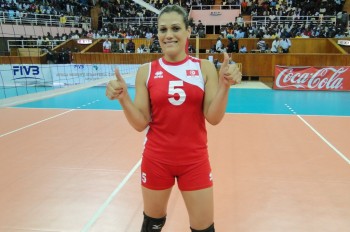 Throughout 19 years of love with Volleyball, Nihel is still searching for a title with the senior national team after she already satisfied herself with a lot of individual prizes since she started her international career. However with her big interest to volleyball, she didn’t forget her other world of practical life as she is now continuing her post graduate research in Sports Organisation.

Now it has become difficult also for the Tunisian team to win the African Nations Championship in Nairobi in presence of the superb Kenyan team who had both collective line up and the great support from the excited spectators to remain without a title with the national team.

On the other hand she didn’t miss a prize in any competition since she selected to the Tunisian senior team in 2003. That year she was playing for the first time for the national team after playing with all the Youth and Junior stages. She was the best scorer in the African Nations Championship 2005 in Nigeria, then the best receiver in Kenya 2007 and the best server in Algeria 2009 before her team was absent in 2011.

However, Ghoul still searching for a title with the senior national team before she retires maybe years later.

In 1994, when she was only 10y old, Nihel started playing volleyball in her primary school in Klibia. Her father was a famous sprinter in the short distances as she learned from him the bases of physical fitness in sport. She was stronger than her colleagues in hitting the ball so she played as a receiver to use her strength to hit the ball.

“My physical power was enough to start my professional career very early as I started with Klibia club when I was only 13y. After only 3 years I was selected for the Youth national team where we gained the African Nations U18. I continued thereafter with the junior team to continue my ambitions of representing my country,” she remembered.

“The Turn point of my professional career was in 2003 when I started playing to the senior team for the first time. I was dreaming to play in Europe, but I couldn’t realize that my dream will be a reality very quickly“

When she showed her quality performance with the national team she signed a contract with Le Havre club in France in 2007.

“It was a golden chance to live both the professional volleyball career and continue my study in physical education in France. I was honored with Master degree in Sports Education, while I was playing in the French league as a professional. Two different missions but what was interesting to me is that both of them are in my beloved sport Volleyball.”

Even after retirement, she needs to be a volleyball coach beside her basic study in Sports field.

“I need a crown with my national team before I leave the court. It will be my last dream.” she concluded.

ECH M: Andrea Anastasi – “We are not afraid of anyone”