CEV CL M F4: In F4 with slow motion ; Instructions for use

The Final Four of the Champions League will be held in Lodz, thus making the history of volleyball, regardless of the outcome at the end of two days of playing. 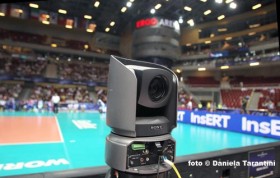 The event in Atlas Arena will be the first to take advantage of the so-called “slow motion” (technically defined by the CEV in English “Video Verification”), thus exploiting the most advanced technology available to the TV production of POL Sat.

The goal is to help the referees make the most difficult decisions and avoid discussions under the net. It will also be a spectacle by creating moments of fun and excitement.

According to CEV regulation prepared by this event, already implemented in the current season by the Polish PlusLiga, the captain of each team has the right to have two requests for verification of video, on which is recorded what happened in the last action in set.

If the result of the ‘slow motion’ will produce a change in the referee’s decision in favor of the team that has requested, the rating will be changed immediately and the number of possible requests for that set will remain unchanged (always 2).
Otherwise, the captain of the team will then have just another opportunity to see what has really happened in the last action.

The referees will have the opportunity to consult the replays on two occasions: if thay are not sure in their decisions and will do so in any case where the doubt arises on the occasion of an action that closes a set.

The request for verification of video can be done only if: the ball  fell inside or outside the court during the play, the ball has touched the bar that defines the area above the playing area of the net, a player has stepped on the line of nine meters at service, of ten feet when attacking from the second line, or if he invaded the mid-court with a whole foot under the net.

The captain may require verification of the screen no later than five seconds from the end of the action and shall always give reasons for the request. During this verification, the two teams will not leave the court, but will await the response within it.
The second referee will check what really happened on the screen and report to the referee the correct observation from the slow motion.

PlusLiga in this experiment has got interesting results so far, but there is no doubt that the Champions League Final Four will be a real litmus test to see if they should continue this way.

Words of Stoytchev: “For us it is a first time ever with this type of technology and I do not hide that I am very curious to see if it can really help. I am obviously in favor of anything that can help make a correct decision. This weekend will be a really important test. “