Lodz, Poland, March 17, 2012. The home guys of PGE Skra BELCHATOW opened the much awaited Volleyball weekend of the year in Lodz by downing Arkas IZMIR of Turkey in straight sets (25-23, 25-21, and 28-26) thereby qualifying – for the first time in history – for the final act of the CEV Volleyball Champions League. PGE Skra played extremely well by the moments where it counted the most, namely in the final rushes of the first and second set, while Wlazly & Co. furiously stormed back after a very poor start in set 3 and even diverted three set balls for Arkas to finish the job in straight sets to the delight of their many – and always uniquely passionate – fans. 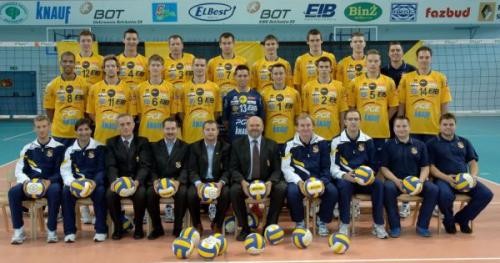 A yellow and black wave – the corporate colors of PGE Skra BELCHATOW – was the real trademark of the “Atlas Arena” this afternoon in Lodz, as more than 12’000 supporters of the local heroes got together to support their quest for European glory.

But before the trophy of the world’s most elitist competition will be at stake, the guys captained by Mariusz Wlazly had first to edge one of the real sensations of this season, Arkas IZMIR of Turkey. Two years ago as well as back in 2008 PGE Skra had failed to claim its semifinal matches and hence this game with Arkas was a first chance to interrupt such a negative tradition. Additional emotions were contributed by a special video recently filmed by the hosting club projected right before the start of the game and whereby, one by one, some of the players included in its roster openly declared their ambition and intention to seize this year’s Champions League.

Well equipped with their colorful gadgets, the supporters of Skra immediately created a fantastic ambiance as they could barely wait for the start of a game that was anyway going to write a piece of Volleyball history for the international premiere and debut of the so-called “video verification system” whereby the teams are able to challenge, twice per set, the decision of the referees.   It was also a very special moment for Arkas IZMIR, the first side from Turkey able to claim a European trophy – the Challenge Cup in 2009 – and now to make it to the top four of Europe’s most elitist league after being joined and assisted by the always professional guidance of Glenn Hoag.

PGE Skra opened strongly (6:3) but IZMIR could claw back to -2 (6:5) helped by the errors made by the local guys; actually some tension and nervousness was to be perceived on both sides of the net, as additional mistakes called for the first technical stop by the score of 8:6 for Skra. Next was Mariusz Wlazly, who emulated Arkas opposite Liberman Agamez by serving into the net, before PGE Skra opened a small cushion (14:10) actually more by profiting from the evident lack of consistency of Arkas spikers than on its own merit.

At this moment Canadian-born Glenn Hoag asked for his first time-out but the gap still stood at 3 by the second mandatory stop that followed a couple of minutes later. The Polish fans relentlessly played their drums to accompany the march of their heroes from the stands, but Arkas eventually found the right pace with a spectacular spike of Agamez almost drawing the count (22:21) and forcing PGE Skra coach Jacek Nawrocki into a time-out. Local star Bartosz Kurek was the one who stopped that negative series with a marvelous pipe attack before Joao Paulo Bravo scored the next rally for the guests. A couple of set balls were there for Skra as the first referee whistled a fault in defense to Arkas but the first opportunity was successfully diverted by Agamez. However, some euphoria spread across the “Atlas Arena” as the Colombian opposite was stopped by a Polish triple block for the provisional 1:0 (25-23).

Skra – whose actions were being carefully scouted by the head coach of Poland’s national team, Andrea Anastasi, and his assistant Andrea Gardini – clipped the first couple of rallies in set 2 and confidently set the pace of the game up to the first mandatory break, gradually widening the gap with an ace of Kurek (7:4) before Daniel Plinski placed a delicious tip to seal the provisional 8:6 on the scoreboard. The score stayed actually pretty tight with Arkas leveling at 10 before captain Wlazly got his side back on track with a couple of splendid attacks (12:10).

The real revelation of this season, Arkas, did not pave the way of Skra with gold and constantly fought back to make it a very exciting run; PGE Skra had somehow made the difference in the opening set via a more solid performance in reception but as the hosts asked for the first time to challenge a decision of the referees and without success, the score moved up to 18 all.

An ace of Agamez turned the charts around contributing the first lead for Arkas (20:21); after a short stop, Skra resumed to the court with the right spirit and re-gained full control of the operations scoring the next four rallies in a row (24:21) and even a time-out asked by coach Hoag could not do much to stop the run of the men in yellow and black jerseys, with the provisional 2:0 being sealed by an attack of Kurek (25-21).

By this point the situation looked very favorable for PGE Skra: having finished third in 2008 and 2010, always in front of the home audience, this time it seemed like they were ultimately going to make it to the “big finale”, also helped by the nice choreography of their fans who – being called upon by the speaker – regularly alternated an all-yellow and black scenario in the sports hall.

Arkas did nevertheless take up a demanding challenge going up 7:1 in the opening of the third set before Skra woke up after a terribly slow start to make it 7:5 for the Turks. PGE struggled a bit in defense and hence was still trailing down by the mid of the set (11:15) before the comeback was completed by Kurek (15 all) with his trademark, a powerful spike from the back row. Some more turnarounds followed – and another unsuccessful attempt by Skra to take advantage of the challenge system – until Kurek spiked into the net to provide Arkas with a set ball (23:24).

Coach Nawrocki stopped the game and captain Wlazly immediately took the responsibility to score the next point; two more set balls for IZMIR followed but without success for the Turks, before Skra silvered its first opportunity to finish it in straight sets with yet another spike of Bartosz Kurek (28-26), who ended up being the best scorer of the game with 18 points.

“We have been working for a couple of years to gradually build a solid team and we have regularly tried to play with the same starting six to get the right team work and consistency. I can proudly say that with this win we have paid back our debts towards our sponsors and Board of Directors who have accepted the challenge to organize once again the final four” said head coach Nawrocki after the game.

“I am also proud to state and ascertain that we have taken our lessons from two years ago after we lost that ominous semifinal match to Dinamo MOSCOW. This time my players stayed cool and fully focused from the start up to the end and they fully stuck to our tactics, so that we could stop Agamez, the opposite and most dangerous player of Arkas” he added. “Many thanks also to our fans that came to the sports hall and contributed once again a great atmosphere”.

“The experience and the team work of PGE Skra made the difference this afternoon” stressed Glenn Hoag. “You can clearly see that they have been working with this group for a long time and all this work is finally producing the expected and well deserved results”.

BRA M: Sada Cruzeiro won the first round of playoff

CEV CUP M: ACH Volley re-starts from the scratch after away defeat to Resovia