Two years after losing the final match to Italy’s Volley BERGAMO, Fenerbahce Universal ISTANBUL will be vying again for the trophy of Europe’s most elitist league after the stellar group mentored by Zé Roberto edged Dinamo KAZAN of Russia (3:1; 17-25, 25-23, 25-17, 25-18) in the second semifinal played at “Heydar Aliyev” Sports and Concert Complex in Azerbaijan’s capital city. 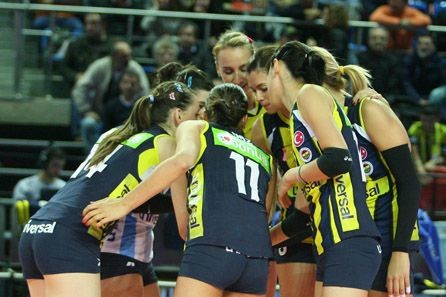 After losing, and quite clearly, the opening set to the ladies from Tatarstan, the “yellow angels” displayed some world-class and magic Volleyball to challenge RC CANNES in the deciding act of the competition, which will be a remake of the classy semifinal claimed by the Turks back in 2010 at “Palais des Victoires” as the French Riviera was playing host to the final four.

The close connection between Azerbaijan and Turkey is well known as the official languages of these countries are so similar that their respective citizens can easily understand each other while using their own idioms. Therefore it was not a real surprise to see the “Heydar Aliyev” Sports and Concert Complex in Baku getting gradually crowded by the fans of Fenerbahce, all wearing their yellow scarves or other gadgets produced by one of the most popular and successful multi-sports clubs in the world. The players from Turkey’s metropolis, Istanbul, had crashed the dreams of the local heroines representing Rabita BAKU in the 1/4 finals of the CEV Volleyball Champions League but still they were going to enjoy the full support of the Azeri audience in their semifinal match with Dinamo KAZAN. On the other side of the net, the Tatars – a rookie in Europe’s premier league – around Ekaterina Gamova had the ambitious goal to double up the victory of their friends from the men’s club of Zenit in last week’s final four in Lodz, something that would turn Kazan into the real Volleyball “Mecca” of the Old Continent. A small group of fans had traveled from Tatarstan to Azerbaijan’s capital city too, while Dinamo was going to be supported also by its mascot, a ladybird, which was standing next to the court already before the start of the game.

Fenerbahce had already missed twice its call – especially last year’s home defeat in the semis to Vakifbank was a major disappointment for the club – and this time, with the roster having significantly changed with the departure of some stars but the arrival of some more world-class players, the so-called “yellow angels” certainly did not want to disappoint their loyal and passionate supporters. Korean opposite Kim Yeon-Koung – who had joined Fenerbahce after having been scouted for many years by head coach Zé Roberto – was one of the best additions to the team together with US American Logan Tom and Fabiana Claudino of Brazil; as for Lioubov Shashkova, it felt quite strange to see her fight against a side, Dinamo, which comprises most of her mates from Russia’s national team.

Fenerbahce dictated the tempo of the game by the first technical time-out (8:6) with the help of Kim and Shashkova. However, Dinamo – an almost all-Russian group, with the only exception being US American Jordan Larson – delivered a great fight and turned the odds around going up by 4 (12:16) to make things a little bit more complicated for the pre-favorites from Turkey. Gamova and Makhno displayed some great actions under the eyes of legendary coach Nikolay Karpol who was also in attendance for this semifinal match, sitting right next to his Azeri friend and colleague Faig Garayev. Zé Roberto asked for a break as his side was trailing 12:18 and the girls responded well, by claiming the next two points. An ace of Kim contributed the -4 on the scoreboard (16:20) but Larson re-asserted the absolute dominance of Dinamo, at least in this section of the match, that was significantly closed by a block of the American outside hitter (17-25).

The score remained extremely tight in the opening of the second set with Fenerbahce having to chase its opponents before moving up 8:6 via the help of middle blocker Eda Erdem. Things were nevertheless not that easy for the star-studded and multi-national group from Istanbul as Dinamo was regularly fighting back with all spikers being well mastered by setter Marina Babeshina. Many long rallies followed as both teams were displaying some great defense and once the second technical time-out was called, Fenerbahce had restored its leadership, but only with an extremely narrow margin (16:14). An incredible rally that once again – if there was any need for that – did confirm the class of the players starring in this semifinal was finished by Gamova who did the same only a few moments later to take her side by the hand and make it -1 for Dinamo before a block on Kim contributed the much desired deuce at 19. Logan Tom spiked long to see KAZAN move to the front but Shashkova promptly restored the balance. Additional emotions were still to come: Dinamo fought back again from 20:22 to 22 all, a crosscourt of Kim finished off the court, then Shashkova claimed the next rally for Fenerbahce before an error of Gamova contributed a first set ball for the Turks who did not miss their chance promptly blocking a fast attack of Maria Borisenko (25-23).

Fenerbahce accelerated the pace in set 3 with a pretty impressive 5:1 to open the operations there as Kim was literally outstanding, spiking with great efficiency from all angles of the court. A couple of blocks stopping first Larson and then Gamova widened the gap (11:5) while it seemed that, free of any pressure, Fenerbahce was finally playing its best Volleyball. Dinamo was alternating its two setters, Babeshina and Khrzhanovskaya, but still their opponents were keeping full control of the game (16:10) and even the return of middle blocker Borisenko – who had missed the first part of this set – could not help much stop the march of the “yellow angels” (16:10). Accompanied by the very enthusiastic choirs of the fans, Fenerbahce literally routed its opponents in every single fundamental (20:13) even though Jordan Larson – a former elite player from the University of Nebraska – was still trying to put up some decent resistance for the likes of Dinamo. Nevertheless, it was almost impossible to break that unbelievably solid wall even for Gamova – MVP of the 2010 World Champs in Japan – and that set quite rapidly came to an end with a fast attack of Fabiana (25-17).

The real show of Fenerbahce continued also in set 4 (8:4) but it was still too early to start any kind of celebrations since Dinamo was not yet ready to bury its hatchet (8:8). With both teams having excelled in defense, up to that moment Fenerbahce had made the difference in attack (53% vs. 25% of efficiency for KAZAN), and by the second mandatory stop it looked like the fate of the game was already determined (16:11). Every single rally scored by the Turks was joyfully greeted by the fans and Kim – who else? – was once again there to call for a flurry of match balls (24:17), with the second opportunity silvered by the Korean star of Fenerbahce who amassed a total of 32 points to top score in the game.

“The final match with RC CANNES will be a great fight” said Zé Roberto after this semifinal. “They have a couple of outstanding middle blockers, Rasic and Ravva, while Centoni is also in a great shape. Their libero, Paola Cardullo, is like a cat, she is reaching every ball and so we will need to deliver a great performance to take the trophy”.