CEV: Poland gets closer to the semis with a thrilling win over Russia

Ankara, Turkey, May 2, 2012. Another five-set thriller in Pool II marked the second competition day at the 2012 Olympic Games - European Qualification in Ankara. This time Poland triumphed as the winner of a dramatic encounter with reigning world champions Russia by carving out a 3:2 (25-17, 16-25, 25-21, 19-25, 18-16) victory and kept its position on top of the standings – a step away from securing a spot in the semifinals. 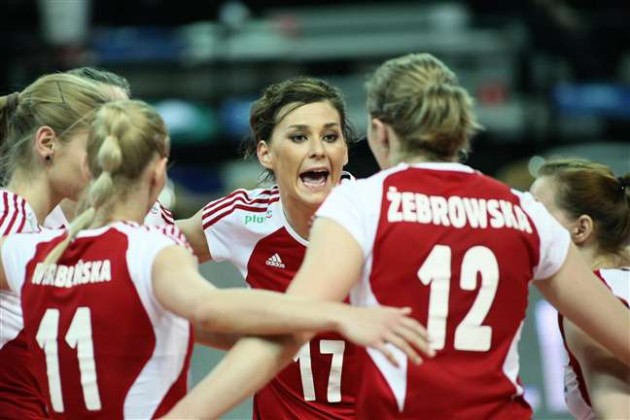 Poland took advantage of the many mistakes Russia made in the first set.  Alojzy Swiderek’s players took control of this set and never let their impressive lead slide away. A powerful hit by Izabela Zebrowska for the last point finished it off at 25-17 in Poland’ favor.

Russia was quick to respond and dominated in the second set. Some powerful blocking, especially by Liubov Shashkova, accompanied by many errors on the Polish side gave the team of head coach Sergey Ovchinnikov the necessary advantage to equalize the set score after wrapping it up at 25-16 in set 2.

In the third set Poland resumed its great efforts in offense from the beginning of the game and was able to regain control of the match. It was more difficult for the Russian block to stop the strong Polish attacks, especially the powerful hits by Katarzyna Ewa Skowronska-Dolata. The girls in red and white kept their concentration to close the set at 25-21.

However, Poland continued to make more errors than the opponents. In the fourth set Russia took advantage of that and by stepping up its efforts in offense was able to once again reset the equilibrium. A very efficient Ekaterina Gamova in attacking helped her team win the set by also hitting the last ball for 25-19 in Russia’s favor. It looked like close the the first referee’s heart was the place to be in this match since the team on the left side of Susana Rodriguez Jativa won each set so far.

Russia started the tie-break on the right which means they would finish it on the left and, indeed, Poland was in the lead 8-7 at the side-switch.  But superstitions like this only help you if you help yourself.  As the Russians came back from 10-14 to end up with a match-point at 16-15 it looked like the magic was working, but three attacking errors in a row ruined it all for the reigning world champions. The scoreboard was showing the numbers 18-16 and the Polish team was rejoicing.

With 25 points for the winners Skowronska-Dolata topped the scorers’ chart of the match with Russian star Gamova lagging 3 points behind.  Poland’s serving in this game resulted in a total of 10 aces against only 2 for Russia.

“We are happy to win against such a challenging opponent like Russia,” Polish captain Katarzyna Skorupa said after the match.  “They have always been difficult to play against because of the height of the players.  It was not easy to break through their blocks, but we were able to overcome this difficulty”.

Head Coach Alojzy Swiderek added:  “We knew that it was going to be a tough match, but we showed our fighting spirit, especially in the tie-break, and won.  However, we made many mistakes in the second set, which I was not happy with”.

Another volleyball wedding – Sam Deroo got...