On the first day of the "Final Six" FIVB World League, Russia has beaten Iran with 3-2. after a tremendous game! 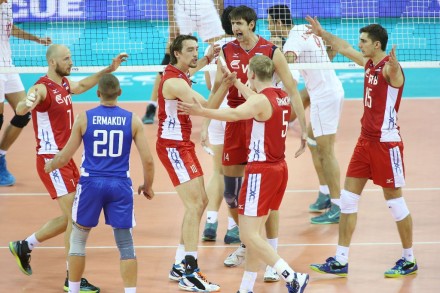 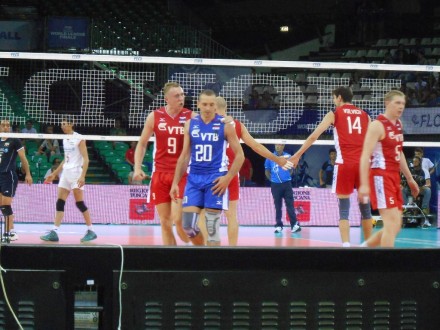 After two good points of Pavlov 1-3, Iran made three in a row for lead 4-3. With two mistakes of setter Marouf the results was tied 5-5, but at the first technical time out Russia was ahead by one – 7-8.

Iran is in a good mood. Marouf made ace and Ghaemi blocked Apalikov for 11-8. The coach of Russia Voronkov was forced to take a time out. After a while, the scoreboard showed that Ghafour made fourth point for Iran for 14-12 lead.

On the second time out Iran had 16-13. After a short break Pavlov scored, but Mousavi made block and then an ace for even larger lead – 18-14.

After a long and extremely interesting point, Russia reduced the lead to 19-16. But, Fayazi scored from the second line and Gholami made a block for 21-16. The left-handed Ghaemi recorded an ace for set point 24-17… Iranians used the second one for 25-18. 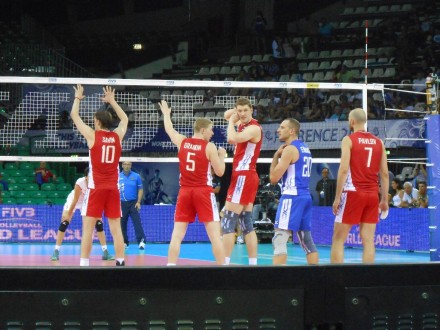 Iran continued with good game – 3-1 at the beginning of the second set. Russia is without attack and block, and Muserskiy is invisible on the court. But, there he is! Muserskiy made two blocks and Savin scored for 5-7… Iran answered with two consecutive points for 7-7. Savin scored for Russian lead on the first TTO 7-8.

It was a tied game until 9-9… Then, Savin and Muserskiy again turned on the engines and Russian was up ahead by three – 10-13. Miryajanpour made point and then mistake in service for 12-14.

Kovač changed players (Mirza out-Fayazi), but Muserskiy continued with strong play and made point for 12-16. Iran came naer with block of Ghilami (15-17), however good points of Pavlov gave Russia 15-19 and 16-21. Iran asked for time out. With two service mistakes in a row, Iran practically gave set point to Russia (18-24) and the setter Marouf sent the next ball out for 18-25. 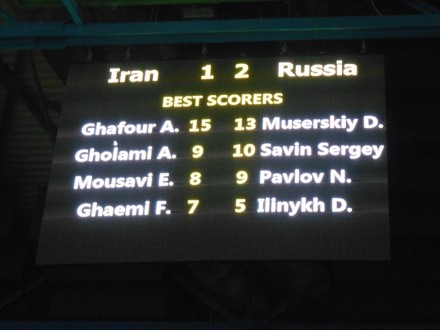 This time, Russia had the opening advantage (1-3), but, Mousavi tied the score at 3-3 and 4-4. The score went point for point until the first technical time out when Muserskiy scored for 7-8. But, then – tunraround. Good attack of Ghafour brought Iran up by two – 11-9… However, with two blocks of Muserskiy Russia came to 11-11.

Close game has been seen until the second TTO. Ebadipour made mistake – 15-16.

Spiridonov has entered the court and with his help Russia made two points advantage – 18-20. With good attack, but also thanks to mistakes of Iran, Zbornaya doubled that lead to 19-23… Slobodan Kovač called a time out. It did not change anything.. Muserksiy scored for set point and Spiridonov finished this period – 21-25. 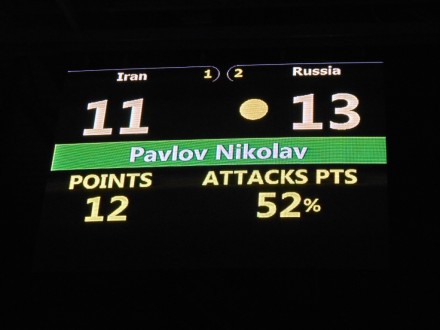 Spiridonov has taken the main role in the Russian team. After good and little bit crazy attacks he led Russia to 6-9 lead. Iran’s receiver Ghaem scored and decreased the deficit to 12-13 but Russia again went on +2 (12-14).

After very long play Iran took the point for the second TTO and made a turnaround – 16-15. Teams were playing point by point until 20-20, but then Russia escaped to 21-23. Iran took the next point (22-23) and this time Voronkov called a time out to calm his players. But Iran equalized on 23-23! 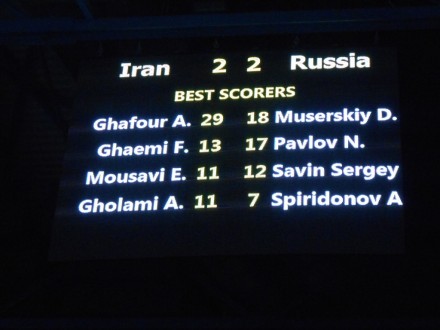 Iran came into the fifth set in victorious style. The team of coach Kovac led 2-0 and 4-1, so Russians had to call a time out. Muserksiy made mistake for 5-1… But… But… Russia then showed its full strenght. Very quickly it was all tied at 5-5 and then 7-7. Iran made a mistake for 7-8. Iran has won only one more point until the end of the match. Russia finished the game with two consecutive points by Volvich…

it was a great match.Iran can go to the next round.