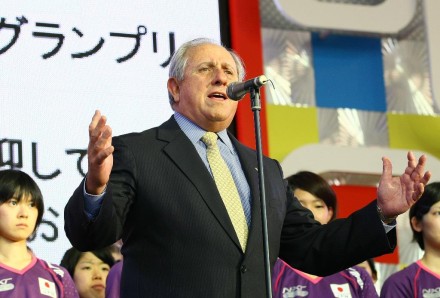 “It’s been a tremendous week for women’s volleyball and the culmination of an outstanding edition of the World Grand Prix,” President Graça said. “This year we have a record 28 teams playing, instead of 12 in the past, and this has provided great opportunities for more countries to take part at the highest level.

“The most important thing is that we gave the chance to develop to some countries that did not have the chance to play the World Grand Prix before. Now they have the chance, they can come up and improve their level step by step,” he added. “You have to improve by playing against strong teams and seeing what all the other teams are doing. Only practice is not enough.”

With this year’s World Grand Prix divided into three groups, the contention for a berth in the Finals of Group 1 became more difficult than ever. Ten teams out of 12 had collected four wins or more in the Preliminary Round, but only four of them could join the hosts Japan and Group 2 winners Belgium in the Finals.

“Teams are improving very quickly and there were a lot of surprises, good surprises, like Turkey,” President Graça said. “Can you believe the United States were not in the Finals? They were the champions from 2010 to 2012. I have told the players that to be here in the Finals is already a champion.”

Hosts Japan had an impressive run in the Finals to guarantee their best finish in the World Grand Prix, but their performance was no surprise to President Graça.

“I always said if Japan changed their way of playing, they were going to win. Two or three years ago, they were playing like 20 years ago,” he said. “Now their women’s team is completely different and I hope their men’s team start to play with a different style as well.”

President Graça believed that the sport of volleyball will get more and more popular around the world.

“For the London Olympic Games, we had 143 countries playing for the qualification of beach volleyball. For the Rio de Janeiro Games, we have 195. As for volleyball, we have 175 countries trying to qualify for the Rio Games. We are not a sport concentrated in one part of the world. We are popular all over the world.”

All Grand Prix medallists together (PHOTO)