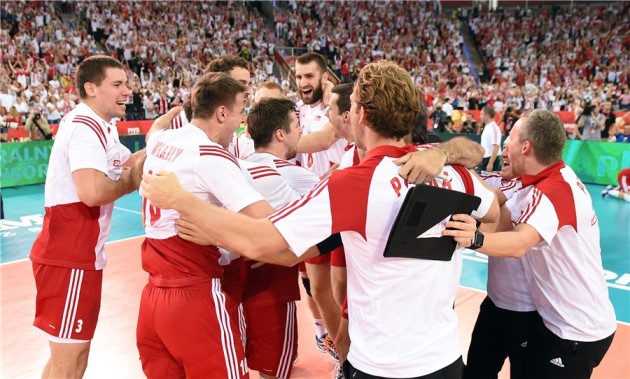 The whole game was epic, but the ending… It was like we were watching some thriller movie. Very, very good thriller movie. After all, it was all over with a video challenge…

Poland opened the tie-break with 7-2 lead, and people in Lodz Arena have already started to celebrate victory. But, Brazil refused to surrender.

Squad of Bernardo Rezende started decreasing deficit point by point, and they came near to 8-7! Poland side could not withstand the pressure in that moment, players started arguing with the referee and with the rivals, and they received the red card! Point for Brazil! It was all tied at 8-8! Absolute silence in Arena!

But, coach Antiga managed to raise the moral in his team. Mostly thanks to Mariusz Wlazly who had a fantastic evening. Poland successfully recovered and, after a point by point period, came to the first match ball (14-13). But, Brazilian players immediately equalized the score, and then blocked Wlazly for their first match ball (15-14)!

However, we did not tell you that Wlazly was fantastic because of that. Polish spiker passed through the block in the next point for 15-15, and then used the counter-attack for new match ball of Poland (16-15).

It was the last point in the game. Brazil had a bad attacking play, and red and whites had a counter… Klos spiked the ball… It went into out! But, Antiga called for a challenge.

The man of the match was definitely Wlazly who scored 31 points! He was followed by Karol Klos and Mateusz Mika who added 13 points each. On the other side, Felipe Fonteles scored 17 points, while Leandro Vissotto and Ricardo Lucarelli made 16 each.

Also it is very important to mention that Michal Winiarski played in this game despite injury, so did Wallace De Souza and Sidao. However, Murilo Endres could not help his teammates from Brazil.

Brazilians said Poland had 0 chances in winning the WCH. Nice now seams like Brazil is the one with 0 chances..

Outrageous behavior brazilians after the match. First rude to one of the Polish journalists acted Bernardo Rezende. He showed middle finger to polish journalist, they dont go to press conference after match. After each meeting, the players are required to go through the so-called. ‘mixed zone’ in which journalists waited Polish and Brazilian. Several ‘Canarinhos’ at all costs not want to comply with the requests of the World Cup press officer. There has therefore been jostling with Thomas Wolfke who tried to persuade Brazilians to leave the hall right way. Some volleyball players went through the ‘mixed zone’ (at the request of a talk reacted but only one of them – Wallace da Souza), and some showed a lack of professionalism and bounced through the railings to bypass the media. They behaviors probably will end up in financial penalties. The whole issue has to be addressed FIVB.

CRO: Croatian cup finals up ahead