The Round 1 of #WoVDreamTeam 2015/2016 poll is very close to the finish line. Tonight at 00:00 CET, we will eliminate the players with the lowest number of votes and launch the Round 2! 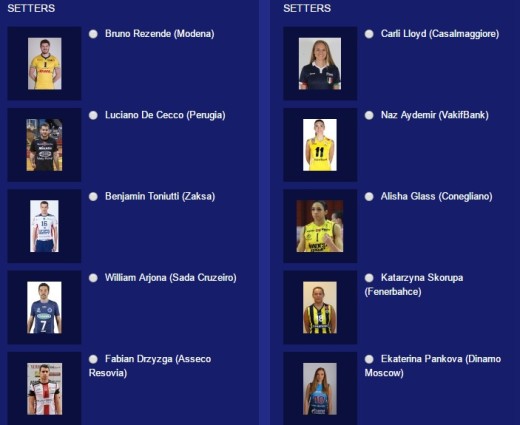 We have to mention that two setters, two opposites, four receivers, four middle blocker and two liberos are going to be crossed out after Round 1 both in men’s and women’s competition.

The setter William Arjona (Sada Cruzeiro) has the lowest number of votes so far if we count voting on our website, Twitter, Facebook and Instagram. He needs miracle to stay in race for Dream Team 2015/2016. Drzyzga and De Cecco will fight for the Round 2 until the very end.

Luca Vettori is in trouble when we talk about the opposites. The player of Modena is likely to leave the competition as he has 200 votes less than Antonin Rouzier. The Frenchman is chasing Zenit’s opposite Maxim Mikhaylov, and it will be uncertain race.

Four receivers will be crossed out after the Round 1. Kunihiro Shimizu, Uros Kovacevic, Facundo Conte and Matey Kaziyski are likely to be eliminated. The difference between Conte and Juantorena is small, but there is little time left…

Four middle blockers won’t continue competition as well. So far, Emanuele Birarelli, Isac Santos Niclas Le Goff and Simon van de Voorde are the players that are probably leaving us after this round.

The French volleyball player Jenia Grebennikov has a lead among liberos. A member of Zenit Alexey Verbov and Modena’s libero Salvatore Rosini are very close to finish the race for the #WoVDreamTeam 2015/2016.

Vote to save your favorite players and to help the reach WoV Dream team!

Setters Ekatarina Pankova has no chance to continue competing in #WoVDreamTeam. But Alisha Glass and Katarzyna Skorupa are fighting for the place that leads to Round 2.

Miyu Nagaoka, Helena Havelkova, Jordan Larson and Francesca Piccinini are likely to leave us tonight. Piccinini has some chances but Gozde has advantage so far…

Middle blockers Sinead Jack, Rachael Adams, Irina Zaryazhko need miracle to stay in the race. But, Foluke Akinradewo and Jovana Stevanovic will fight until the last breath for the Round 2. The difference is only in few votes.

What a race among the female liberos! Gizem Karadayi and Brenda Castillo are safe, but we don’t know who’s going to win among three liberos – Fabiana de Oliveira, Anna Malova or Silvija Popovic. These three players are fighting for Round 2 and there is a place only for one.

PHOTO OF THE DAY: Look where Atanasijević...