WorldofVolley is preparing another #WoVChat interview. We hope you are ready because we have the guest from the Turkish giant Vakifbank Istanbul – Giovanni Guidetti. The Italian coach will be answering your questions LIVE on Twitter. 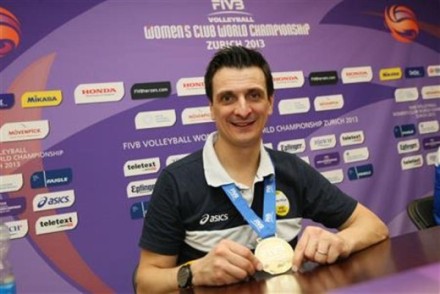 If you just say Vakifbank , the first thought is champion club and coach Giovanni Guidetti!

There is no person in the world who does not know Guidetti and his volleyball success.

In his career he was twice named for the “Coach of the Year” in Italy, where he was born. But since 2008 he became the coach of the Turkish giant Vakifbank with whom he won three gold medals and four silver medals in the Turkish volleyball league, two gold medals in CEV Champions League and two in the Turkish Cup. From the beginning Guidetti has built strong team that never gives up in the games and in each game they improv their volleyball skills.

Maybe the biggest success with Vakif is the first place at the FIVB Club World Championship 2013.

With the German volleyball national team who he led from 2006 until 2015, he won the bronze medal in FIVB Grand Prix 2009 and two silver medals in European Championships 2011 and 2013. In European League he won the first place 2013 in Bulgaria.

Now he is leading The Netherlands who is currently participate in FIVB World Grand Prix 2016. Last year they won silver medal in the European Championship 2015 when they lost in the final from Russia 3-0.

The interview with Giovanni Guidetti is scheduled for Thursday, Jun16th  and it starts at 21:00 (CET) and will last until 21:30 (CET). You will be able to ask him whatever you want using #WoVChat hashtag. Don’t forget to read #WoVChat Rules!

So, prepare your questions until Wednseday and join us LIVE on Twitter.

Looking forward to chat with the best coach in the world (sorry Ze Roberto)! 😉

INTERVIEW: Antoine Brizard for WoV – “The...