Each team has its leaders. 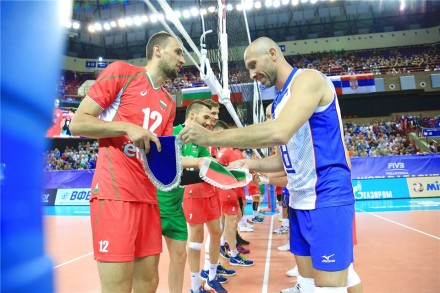 Both the team captain and the coach are responsible for the conduct and discipline of their team members.The Liberos cannot be either team or game captain.

5.1.1 PRIOR TO THE MATCH, the team captain signs the score sheet and represents his/her team in the toss.

When the ball is out of play, only the game captain is authorized to speak to the referees:

5.1.2.1 to ask for an explanation on the application or interpretation of the Rules, and also to submit the requests or questions of his/her teammates.If the game captain does not agree with the explanation of the1st referee, he/she may choose to protest against such decision and immediately indicates to the 1st referee that he/she reserves the right to record an official protest on the score sheet at the end of the match;

a) to change all or part of the equipment,

b) to verify the positions of the teams

5.1.2.3 in the absence of the coach to request time-outs and substitutions.

5.1.3.1 thanks the referees and signs the score sheet to ratify the result;

5.1.3.2 may, when it has been notified in due time to the 1st referee, confirm and record on the score sheet an official protest regarding the referee’s application or interpretation of the rules.

5.2.1 Throughout the match, the coach conducts the play of his/her team from outside the playing court. He/she selects the starting line-ups, the substitutes, and takes time-outs. In these functions his/her contacting official is the 2nd referee.

5.2.2 PRIOR TO THE MATCH, the coach records or checks the names and numbers of his/her players on the score sheet, and then signs it.

5.2.3.4 may, as well as other team members, give instructions to the players on the court. The coach may give these instructions while standing or walking within the free zone in front of his/her team’s bench from the extension of the attack line up to the warm-up area, without disturbing or delaying the match.

For FIVB, World and Official Competitions, the coach is restricted to performing his/her function behind the coach’s restriction line.

5.3.1 The assistant coach sits on the team bench, but has no right to intervene in the match.

5.3.2 Should the coach have to leave his/her team for any reason including sanction, but excluding entering the court as a player, an assistant coach may assume the coach’s functions for the duration of the absence, once confirmed to the referee by the game captain