Each team must play within its own playing area and space (except Rule 10.1.2). The ball may, however, be retrieved from beyond the free zone. 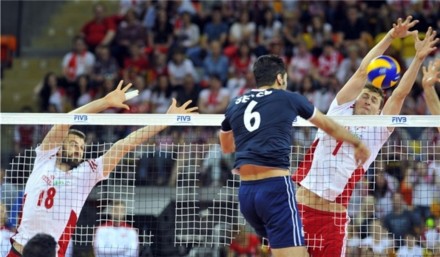 A hit is any contact with the ball by a player in play.

The team is entitled to a maximum of three hits (in addition to blocking), for returning the ball. If more are used, the team commits the fault of “FOUR HITS”.

9.1.2 SIMULTANEOUS CONTACTSTwo or three players may touch the ball at the same moment.

9.1.2.1 When two (or three) team-mates touch the ball simultaneously, it is counted as two (or three) hits (with the exception of blocking). If they reach for the ball, but only one of them touches it, one hit is counted. A collision of players does not constitute a fault.

9.1.2.2 When two opponents touch the ball simultaneously over the net and the ball remains in play, the team receiving the ball is entitled to another three hits. If such a ball goes “out”, it is the fault of the team on the opposite side.

9.1.2.3 If simultaneous hits by two opponents over the net lead to an extended contact with the ball, play continues.

9.1.3 ASSISTED HITWithin the playing area, a player is not permitted to take support from a team-mate or any structure/object in order to hit the ball.However, a player who is about to commit a fault (touch the net or cross the centre line, etc.) may be stopped or held back by a team-mate.

9.2 CHARACTERISTICS OF THE HIT

9.2.2 The ball must not be caught and/or thrown. It can rebound in any direction.

9.2.3 The ball may touch various parts of the body, provided that the contacts take place simultaneously.Exceptions:

9.2.3.1 at blocking, consecutive contacts may be made by one or more player(s), provided that the contacts occur during one action;

9.2.3.2 at the first hit of the team, the ball may contact various parts of the body consecutively, provided that the contacts occur during one action.

9.3 FAULTS IN PLAYING THE BALL

9.3.1 FOUR HITS: a team hits the ball four times before returning it.

9.3.2 ASSISTED HIT: a player takes support from a team-mate or any structure/object in order to hit the ball within the playing area.

9.3.3 CATCH: the ball is caught and/or thrown; it does not rebound from the hit.

9.3.4 DOUBLE CONTACT: a player hits the ball twice in succession or the ball contacts various parts of his/her body in succession.

NEXT, PART 20: Playing actions – ball at the net

NED W: Guidetti on the Dutch bench until 2020