An interruption is the time between one completed rally and the 1st referee’s whistle for the next service. The only regular game interruptions are TIME-OUTS and SUBSTITUTIONS. 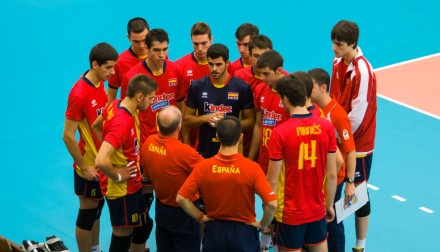 Each team may request a maximum of two time-outs and six substitutions per set.

For FIVB, World and Official competitions for Seniors, the FIVB may reduce, by one, the number of team and/ or Technical Time Outs in accordance with sponsorship, marketing and broadcast agreements.

15.2.1 Request for one or two time-outs, and one request for substitution by either team may follow one another, within the same interruption.

15.2.2 However, a team is not authorized to make consecutive requests for substitution during the same interruption. Two or more players may be substituted at the same time within the same request.

15.2.3 There must be a completed rally between two separate substitution requests by the same team.

15.3.1 Regular game interruptions may be requested by the coach, or in the absence of the coach, by the game captain, and only by them.

15.3.2 Substitution before the start of a set is permitted, and should be recorded as a regular substitution in that set.

15.4.1 Time-out requests must be made by showing the corresponding hand signal, when the ball is out of play and before the whistle for service. All requested time-outs last for 30 seconds.

For FIVB, World and Official Competitions it is obligatory to use the buzzer and then the hand signal to request time-out.

15.4.2 For FIVB, World and Official Competitions, in sets 1-4, two additional 60-second “Technical Time-Outs” are applied automatically when the leading team reaches the 8th and 16th point.

15.4.3 In the deciding (5th) set, there are no “Technical Time- Outs”; only two time-outs of 30 seconds duration may be requested by each team.

15.4.4 During all time-outs, the players in play must go to the free zone near their bench.

15.5.1 A substitution is the act by which a player, other than the Libero or his/her replacement player, after being recorded by the scorer, enters the game to occupy the position of another player, who must leave the court at that moment.

15.5.2 When the substitution is enforced through injury to a player in play this may be accompanied by the coach (or game captain) showing the corresponding hand signal.

15.6.2 A substitute player may enter the game in place of a player of the starting line-up, but only once per set, and he/she can only be substituted by the same starting player.

A player (except the Libero) who cannot continue playing due to injury or illness, should be substituted legally. If this is not possible, the team is entitled to make an EXCEPTIONAL substitution, beyond the limits of Rule 15.6

An exceptional substitution cannot be counted in any case as a regular substitution, but should be recorded on the score sheet as part of the total of substitutions in the set and the match.

15.8 SUBSTITUTION FOR EXPULSION OR DISQUALIFICATION

An EXPELLED or DISQUALIFIED player must be substituted immediately through a legal substitution. If this is not possible, the team is declared INCOMPLETE.

15.9.1 A substitution is illegal, if it exceeds the limitations indicated in Rule 15.6 (except the case of Rule 15.7), or an unregistered player is involved.

15.9.2 When a team has made an illegal substitution and the play has beenresumed the following procedure shall apply, in sequence:

15.9.2.1 the team is penalized with a point and service to the opponent

15.9.2.3 the points scored by the team at fault since the fault was committedare cancelled; the opponent’s points remain valid.

15.10.1 Substitution must be carried out within the substitution zone.

15.10.2 A substitution shall only last the time needed for recording the substitution on the score sheet, and allowing entry and exit of the players.

15.10.3b If the player is not ready, the substitution is not granted and the teamis sanctioned for a delay.

15.10.3c The request for substitution is acknowledged and announced by thescorer or 2nd referee, by use of the buzzer or whistle respectively. The 2nd referee authorises the substitution.

For FIVB, World and Official Competitions, numbered paddles are used to facilitate the substitution.

15.10.4 If a team intends to make simultaneously more than one substitution, all substitute players must enter the substitution zone at the same time to be considered in the same request. In this case, substitutions must be made in succession, one pair of players after another. If one is illegal, the legal one(s) is/are granted and the illegal is rejected and subject to a delay sanction.

15.11.1 It is improper to request any regular game interruption:

15.11.1.3 for a second substitution by the same team during the same interruption, except in the case of injury/illness of a player in play.

15.11.1.4 after having exhausted the authorized number of time-outs and substitutions.

15.11.2 The first improper request by a team in the match that does not affector delay the game shall be rejected, but it must be recorded on the score sheet without any other consequences.

15.11.3 Any further improper request in the match by the same team constitutesa delay

TWITTER INTERVIEW: Brakocevic “My biggest achievement is that I became a mother”

FRA M: Rossard in AS Cannes

PHOTO OF THE DAY: Selfie of Suxho...