The opening day of the FIVB Congress in Anaheim, USA saw an impressive solidarity amongst members when they approved the key FIVB finances and accounts on Wednesday at the Disneyland Hotel on Wednesday. 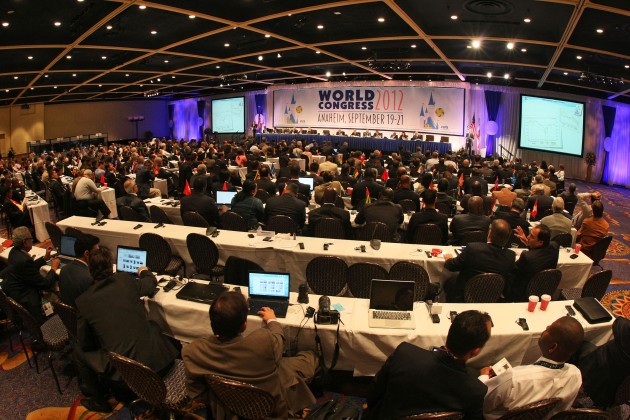 A record number of 262 delegates from 201 national federations, including nine proxies, all passed key accounting items on the agenda using an electronic voting system. The FIVB’s 2010-2011 accounts report, external audit report 2010-2011by Ernst & Young, internal audit report and the report on investments were all approved by a clear majority in addition to the approval of the budget for 2013-2015 and the Report of the Steering Committee on the Development Funds.

The previous attendance record for an FIVB Congress was set in 2006 with 196 federations.

President Wei, providing his President report for the last time in his four year tenure, told the members: “When I try to sum up all of the reforms, I am fully aware of the fact that they have all been accomplished through your support and execution.

“In Dubai I said that I was only a President of transition, but that I was determined to make the FIVB more transparent and democratic – to make the FIVB a real non-profit sports institution and bring it back into the Olympic family. I pledged not to seek re-election, not to be guided by personal interest and to rely on collective leadership to avoid mistakes and wrongdoings.”

ARG: Mini Volleyball Festival for all in Chapadmalal

BUL M: DUPNITSA adds a couple of solid players to its roster

WL: Russia without head coach in the...