The Special Adviser for the UN Secretary-General on Sport for Development and Peace Mr Wilfried Lemke opened the second day of the FIVB World Congress in Anaheim, USA on Thursday, encouraging the volleyball leaders to convince the governments across the world to do more for sport at a grassroots level. 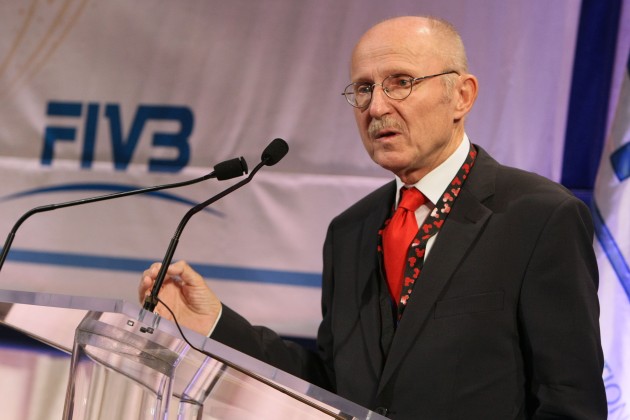 “We need to have more sports in our schools and to get our kids out of the houses”, Mr Lemke said. “Sport is more than moving around, it is also friendship, communication and can be used as a vehicle for peace.”

“Exercise is very important and today many kids are only exercising the muscles around their thumbs playing with computer devices”, he said. “We need more sports and less computers.”

Mr Lemke, who is from Germany, also mentioned the importance of the sport for disabled people and the necessity to have more women in the executive positions.

“We need to integrate more disable people to the practice of sports and I was elated to watch a sitting volleyball match during the Paralympics Games in London”, he said. “We have to bring people with disabilities to the centre of our societies and avoid exclusion.”

“I would like also to see more women involved in sports as directors as one of the goals of the millennium is the promoting gender equality and empowering women”, he asserted.

He pointed out also that FIVB was the first sport institution that approached the United Nations to start a partnership to promote the achievement of the goals of the millennium through sport and credited President Jizhong Wei for the important initiative.

“It is very important that you all can become the leaders and promoters of world peace as the sport has the power to penetrate all areas”, he said.

He also took the opportunity to congratulate the President of FIVB on behalf of UN “for his excellent job during his term taking the FIVB from stormy weather into calmer waters and also to welcome the new president who I don’t know yet but will be one of you.”

“I loved to be there and you had the best location in the heart of London at Horse Guards”, he said. “It was to me the best sport to watch in the Olympics. I was very deep impressed and you did a marvelous job.”

Italy bounce back with team effort against...