Argentina defeated Canada in a very close match to open the actions of the VII Men’s Pan American Cup in Santo Domingo. 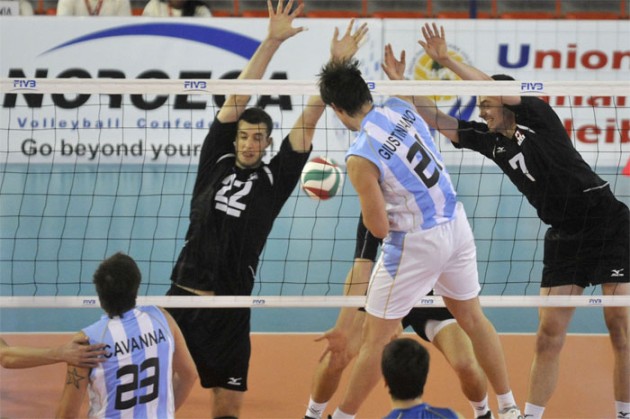 Mariano Giustiniano lived up to his role as captain and led the scores not only of its side but also for the game with 26 points, followed by his teammates Gonzalo Quiroga (20) and Gonzalo Lapera (13).

For the North Americans stood out the opposite Dane Pischke with 22 while Steven Marshall (19), Maxwell Burt (13) and Christopher Hoag (10) completed the scorers in double digits.

Lawrence McKay, head coach of Canada, described the game as very good with very strong rivals. “There was an obvious contrast because even though my players are taller, they had the necessary skills to win. It is a good test for my team to see how another squad, smaller than us, beat us because of their abilities.“

Meanwhile, Fabian Muraco, Argentina’s coach, expressed his satisfaction that the Canadians forced his team to play to a hundred percent, “and we must take advantage of the opportunity, because each of our players know that  we step into the court always  with the willingness to win.“

Maxwell Burt, captain of Canada, congratulated the Argentinians for their outstanding performance, especially in blocking and defense. “We could not do much with the service and that disappointed us, but I hope we will improve that.“

Argentinian captain Mariano Giustiniano was euphoric because “although we had our ups and downs we won a very difficult match against a good opponent.“