ARG: Details of the FeVA & Aclav Meeting about the new electronic passes

Last weekend at FeVA HQ was presented the new electronic passes project and the data for affiliations on the whole country, in charge of Ezequiel Morillo and Marcelo Genaizir, according to the necessities that came out in the work done together by the Argentine Volleyball Federation (FeVA) and the Argentine Volleyball Teams League Association (ACLAV) following the advanced path implemented by the FIVB. 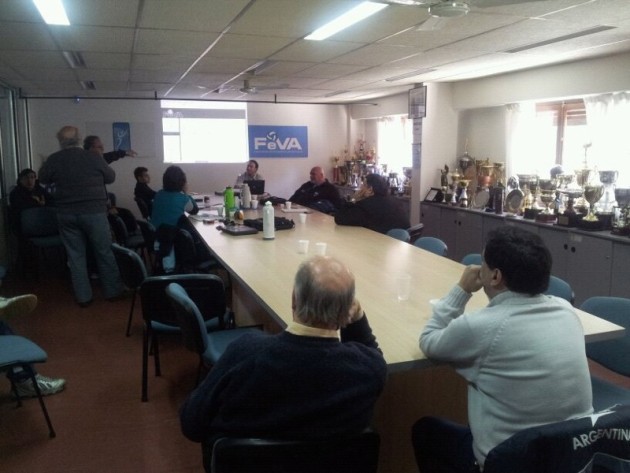 “The people in charge of developing this project presented how the pass program and affiliation data work to make it much easier to unify and centralize all the information on affiliations around the country and to make an electronic system for all passes so as to avoid the use of any forms” expressed Juan Galeote.

The system has been developed since last May and has as main goal to increase the information about volleyball in the whole country and to have such information divided by age, gender, club, etc. “The goal is that all federations have access to the national information, that they participate and that each registration can be put into a general data” pointed out Galeote.

“It is a great advance in national volleyball and specially in the competitions organized by the ACLAV because it makes it much easier to help players change clubs over all in the tournament they organize that is so federative as the Argentine League” added Diego Arribas, ACLAV Competition Director.

The goal of this development is to make it much easier to have access to all federations information with all and each federation being able to make their own registration of players, clubs, referees, coaches, etc and that the passes can be made between clubs automatically. “This Data will allow any federation to have access to the information, including affiliations directly and easily done while the electronic passes, the other main project included here, will avoid the use of forms and help with the passes itself. Each federation will have user and pass word and electronic signatures to be able to access to th program very easily” finished saying Galeote.

FeVA and ACLAV participated together of the development and during the meeting new ideas and adjustments came out so by mid September the system should be in complete use. The goal now is that the passes on the new Argentine League are directly done with this new system.

ARG: World Challenge to be played in...