On Thursday Azerbaijan’s Rabita BAKU qualified for the final four of the 2013 CEV Volleyball Champions League – Women as the cosmopolite armada mentored by Marcello Abbondanza downed once more – for the second time in one week – last year’s bronze medalists Dinamo KAZAN of Russia 3:1. This and other volleyball news read on Worldofvolley.com. 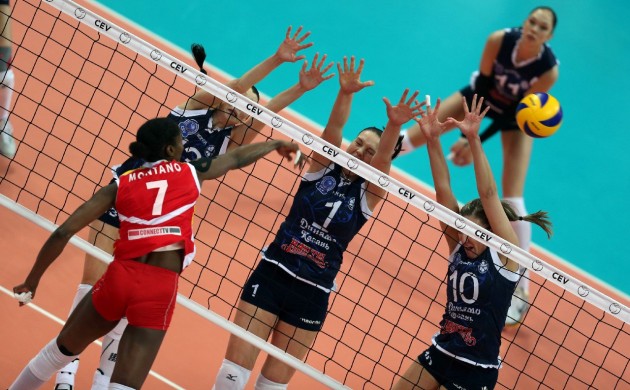 In the semis scheduled for March 9 at Burhan Felek Volleyball Hall Rabita will be playing Italy’s sensation Unendo Yamamay BUSTO ARSIZIO. This will be Rabita’s second appearance in the final four of Europe’s most elitist competition after the team had claimed silver two years ago losing the final match to Vakifbank.

The home heroines of Rabita wanted to provide their many fans with something to cheer about in what was their last home fixture of this European Cups season and they eventually dominated the scene in set 1 and 2 as setter Katarzyna Skorupa marshaled her spikers very intelligently to avoid the tall Russian block. Colombian Madelaynne Montano confirmed her status of rising star on the international stage as she could kill a series of terrific attacks. After claiming a 2:0 lead quite easily, Rabita relaxed a bit and this paved the way for a comeback by Dinamo that seized the third set before BAKU regrouped and could claim that much desired pass to the final four.

“I am very proud of my team as we could achieve our goal to advance to the finals” captain Mira Golubovic says. Rabita mentor Marcello Abbondanza will also celebrate his second appearance in the final four after last year he settled for fourth place while head-coaching Italy’s MC-Carnaghi VILLA CORTESE. “My girls showed their best tonight and I have to thank the fans for their support” he says.

“We did try our best but it did not work” Rishat Gilyazutdinov, the mentor of Dinamo KAZAN, singles out. “Rabita is a very strong team and they did deserve this win” concludes Dinamo captain Maria Borisenko.

AZE W: No one can stop Rabita