Before taking off for the championship of South America, the middle blocker Sidão joined the Brazilian squad. Permanent member of Brazil was sidelined in this year's World League due to a spinal surgery. 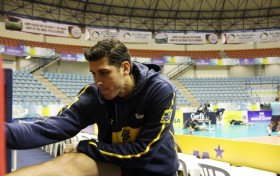 At the end of the World League in 2013, almost all teams had a moment to spare, and then began preparing for the championship of their continent.

National teams of Brazil and Argentina are strong favorites in the tournament, which will be held in Cabo Frio, in the state of Rio de Janeiro.

Brazilian head coach Bernardinho decided to take to the tournament the same composition which a few weeks ago won the silver medal at the World League in 2013.

The only new person in a team is middle blocker Sidão. Player of Sesi-SP Sao Paulo returned to the team after a long pause.

Multiple Brazilian international missed the most of the last year’s season after spinal surgery that ruled him out of the cycle of preparations and matches in this year’s World League.

Rehabilitation went without any complications and he can once again wear yellow and green jersey of the national team.

See profiles of Sidão and Brazil.

Junior Team of Rwanda Off to Turkey