This Wednesday (07.03) Sada Cruziero (MG), the leader of the competition with 44 points (15 wins and 5 losses) will receive RJX (RJ), that is 7th with 32 points (11 positive and 9 negative) in the hall Riacho, in Contagem (MG). The match will be valid for the tenth round of the tournament. 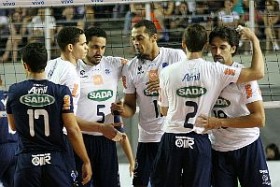 Even with the difference between the teams on the scoreboard, the match promises to be balanced.
Moreover, the result of the confrontation will determine the final ranking of the teams before the playoff.

According to the scorer Mauricius of Cruzeiro, the game will be crucial for both teams. “This is a very important game for securing the first position.

About RJX, Mauricius highlights the qualities of the opponent. “Let’s study their team. We know that we face one of the great teams of the tournament. They have one of the best setters in the world. It will be a tough game.”

The scorer Lipe of RJX,  thinks that his team needs to take special care of the opponent’s attack.

“We are struggling to raise our position on the scoreboard. Our team physically and technically evolved in recent games. The attack of Sada Cruzeiro is very strong and we need a good strategy in block to play against them. William is a great setter and will do anything to hinder our mark.”

The two teams have the best players. The setter William, of Sada Cruzeiro leads with 39.74% in the statistis. His teamamte, the opposite Wallace, is the third best scorer of the competition with 339 hits. The scorer Dante, of RJX, is the best in defense in the league (33.33%).