written by WoV May 6, 2012 source: planetavolei.com.br

Apart from the coach Marcelo Mendez, many players will renew their contracts with Sada Cruzeiro for the new season. 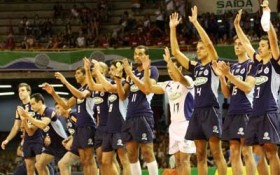 In the team will stay the spiker William, the opposite Wallace, the centers Douglas Cordeiro and Acacio, the spiker Filipe and the libero Serginho. These six players led Sada Cruzeiro to the national vice-championship. The young Wallace will play the third consecutive season for Sada Cruzeiro. He was the second best scorer in the Super League with 558 points and the fifth best hitter. William Arjona received the trophy for the best setter, while Acacio was voted the best blocker.

Douglas, who will play for Cruzeiro for the fourth successive season, was the seventh best scorer in the Super League with 394 points. The president of the club, Vittorio Medioli, commented: “We intend to welcome new players, but the soul of this team remains. We had a good year, won the championship of the Super League and had the great support of fans. Let us stay strong for our sixth season in the elite of the Brazilian volleyball.”