Brazilian volleyball is passing through the biggest crisis in history. 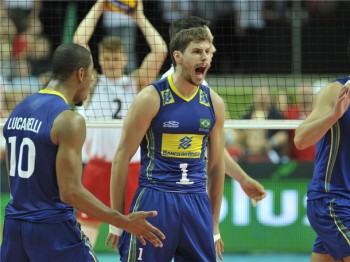 While, FIVB and CBV has its own argue about the fines for all that has happened on the last World Championship, players of the National Team are furious at the Brazilian Volleyball Federation because of the corruption scandal.

Murilo Endres has already stated his opinion, and he got a support from Bruno Rezende. One of the best setters on the world wrote following on his Twitter account:

“I totally agree with the outburst of my friend Murilo Endres. It is absurd that after almost one year of all accusations of corruption no one from CBV was punished! Nonsense!”

And after finding out that he was one of the players which FIVB has punished Rezende just wrote:

“Some kind of retaliation? OK, I will pay 1,000 $ fine, but this is just a diversion. Will they return all those millions? We will not remain silent!”

On the link attached on the Tweet, you can see Ary Graca, President of FIVB, on the picture…

FIVB: Brazil to face even severe penalty if cancels WL