A day before the Christmas Eve, Fabiana showed resentment on the social networks to an airline company which operated two flights: São Paulo-Belo Horizonte and Belo Horizonte-Ipatinga. 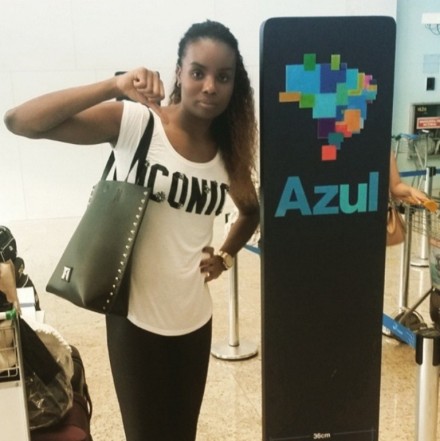 On Tuesday, a middle blocker of Sesi-SP was prevented from boarding to the second flight because a company closed an airplane door before passengers from São Paulo could get on it, according to the player.

Also according to Fabiana, the flight São Paulo-Belo Horizonte was “very late”, so she arrived in Belo Horizonte five minutes after the second flight was scheduled and, in addition, she found a broken lock on her suitcase.

“You know that athlete’s life is a race. We have only few days to contact with the family. Well, today I arrived at 5 am at the airport to catch a flight SP-Belo Horizonte, which should leave at 6 am. This flight was delayed a lot and made us reach Belo Horizonte five minutes later for the next flight, which was BH-Ipatinga. Do you believe that the Azul (Brazilian air company), even though it was responsible for the first delay, sent a plane to leave without the people who came from SP? Not only this, they want to give me a voucher to a bus or taxi instead of an airline ticket I paid! Also, my suitcase lock is broken! The mockery and neglect of flight attendants is absurd. I just want to spend Christmas with my family! It is too much to ask?!” she complained.

Fabiana went from São Paulo after her Sesi-SP lost against Rexona/Ades, on Monday night. The team from São Paulo ended a year second in the Super League, only losing this one game.