Brazil will play two friendly games against Portugal in September. And those two games will be quite special... 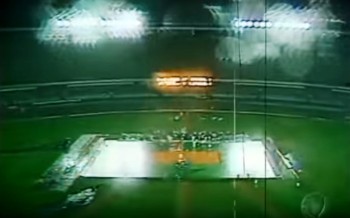 Firstly, it will be the last time that legendary libero Serhingo will wear the famous yellow jersey in his career. Secondly, Brazil will play at a football stadium after 33 years!

Back then, in 1983, Brazil faced Soviet Union at a sold-out Maracana Stadium. Some say that there were 93,000 fans, some say there were 95,000, the rumors go even up to 105,000. Anyway, the game itself will stay remembered by being interrupted twice due to rain!

Even the players helped in cleaning the court with squeegees. Eventually, the teams managed to finish the match and Brazil won by 3:1. Guess who was playing for Brazil that day at Maracana Stadium?

Bernardo Rezende, current head coach of Brazil men’s national team. His son Bruno stated that he remembers his father’s stories about that day.

“He was always telling me it was amazing to play at Maracana. Too bad it rained that day, so they had to clear the court. Anyway, it was definitely an incredible emotion. Having a chance to repeat that after 33 years is simply wonderful. I will be a magical moment for all of us,” said Bruno Rezende for globoesporte.globo.com.

The first match between Brazil and Portugal is scheduled for September 3 and it will be played on Arena de Baixada (Curitiba) with capacity of 42,372 spectators.

The second match will be played on September 4 on Estádio Nacional Mané Garrincha (Brasilia) whose capacity is 72,788 spectators.