Oh, you need to see Vissotto’s face when the official speaker called him the 1st best middle blocker of the Asian Club Championship 2016… 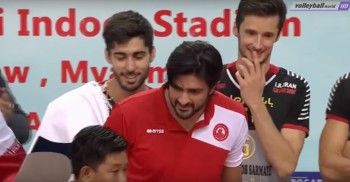 Sarmayeh Bank (Iran) won the Asian Club Championship 2016, so it was logical that their players would receive the most individual awards. Shahrad Mahmoudi was named the MVP of the competition, Milad Ebadipour was the 2nd best outside hitter, Mehdi Mahdavi was the best setter, while Seyed Mousavi was named the 2nd best middle blocker.

Do you know who received the award for the 1st best middle blocker of the Asia Club Championship 2016?

Leandro Vissotto!!! Brazilian OPPOSITE was quite surprised when he received the award for MIDDLE BLOCKER, while at the end of the ceremony he even wanted to give it away to his teammate, who is actually a middle blocker.

The hosts of the competition were obviously very impressed with Vissotto’s height so they thought he is a middle blocker.