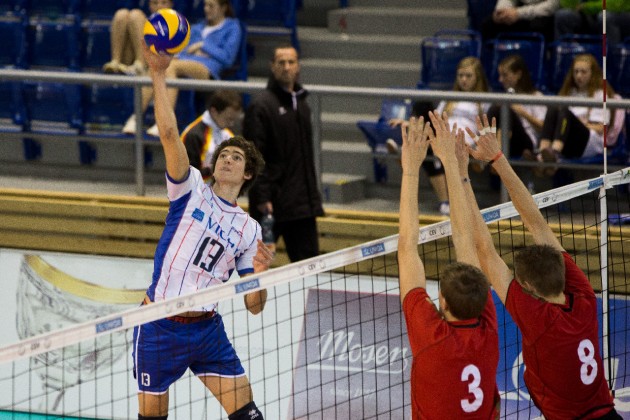 France did so in what was the deciding game of the qualifier that ran through January 3-7 at “Vodova” sports hall in Brno. As they easily edged the Czech Republic in straight sets (25-17, 25-23, and 25-11) Italy finished the tournament in first place with a perfect record of four wins in as many matches.

France started out strong claiming the first set of their deciding game with Germany before their opponents responded very well in set 2 and 3 thereby going up 2:1. France got back on track by claiming the next section and eventually clipped a small margin in the early phases of the tie-break to keep it up to the very end and celebrate a much desired victory.

“It’s great and we are evidently very happy. We have worked hard and we finally were paid back for this. I have no words as I am somehow moved” said France’s libero Jérémie Mouiel after the match.

“We are a little angry, because we were trailing by two points and a decision by the referee did expand that gap to three, so by this moment we were no more able to surge back” commented Germany’s team captain Moritz Reichert.

As his team was already qualified for the final round, Italy’s head coach Andrea Tomasini decided to use his second lines for the last match of the group against the Czech Republic.

Still this did not impact on their supremacy as the local heroes did struggle as they had done in all of their previous matches in Brno. Alberto Bortolato stood out for Italy scoring 12 points while Adam Rychecky paced the Czechs with 11.

“I am very proud of my team. I am coaching a national team for the first time in my career and I am evidently happy with this positive international debut. We can celebrate this success and go back with nice memories from the days we have spent here in Brno” said Italy’s mentor.

“We are very disappointed with our performance in this tournament. We played our best in the first two matches but our next performances were poor. I regret our defeat to Germany since, in my opinion, we could have won that match” said Czech player Jan Galabov.