On Monday Finland cemented its second place in the final standings of Pool E and eventually qualified – together with group leader Belgium – for the final round of the 2013 CEV Youth Volleyball European Championship – Boys scheduled for April 12-21 in Laktasi (BIH) and Beograd (SRB). This and other volleyball news read on Worldofvolley.com. 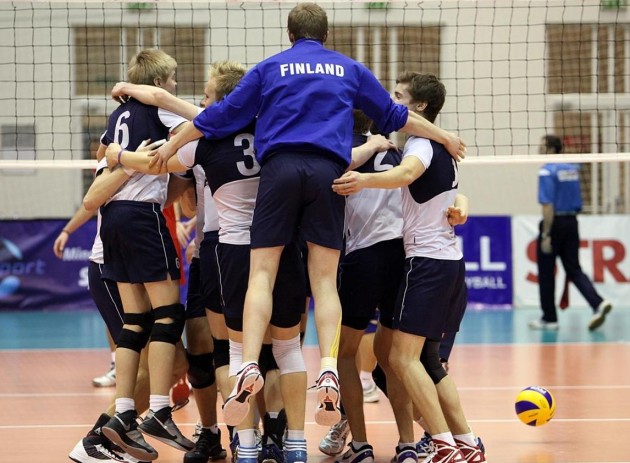 Even though Filip Sestan and Marko Sedlacek delivered a good performance for Croatia scoring 12 points apiece in the end, still this was not enough to stop the run of the Finns. Finland claimed the opening set in only 20 minutes (25-15) and even though Croatia stepped up a bit in the next two, still the Finns could pocket that much desired win with a clear 3:0 powered by their stars Antti Ropponen and Sakari Mäkinen.

Belgium finished its adventure in Kecskemét by edging the hosts of Hungary in a game whose early phases were marked by the tough resistance opposed by the local heroes to Belgium’s real star, 15-year old Thomas Konings. However, Konings was not enough to bring it home and the local favorites claimed the opening set (27-25) before Belgium woke up to comfortably sweep the next three. Konings top scored in the game with 26 points while Gilles Vandecaveye added 15 to the count of his side. Krisztian Padar paced Hungary with 16.

In the last match of the tournament Greece downed Denmark in straight sets (25-20, 25-22, and 25-15) to finish the competition in third place. Greece opened strong (25-20) and asserted its rule also in the next couple of sets to claim their third victory in the tournament. Georgios Tzioumakas was once more Greece’s most prolific player with 18 points while Mads Molgaard registered 14 for Denmark.