Recovered from the shock after the drawing of lots that has assigned no less than the defending champions of Zenit Kazan to BERLIN Recycling Volleys in the Playoffs of the 2013 CEV Volleyball Champions League, the 2012 German national champion has defended the top of the table of Germany’s Bundesliga as BERLIN had the edge over Generali UNTERHACHING in a nail-biting thriller. Read latest volleyball news on Worldofvolley.com. 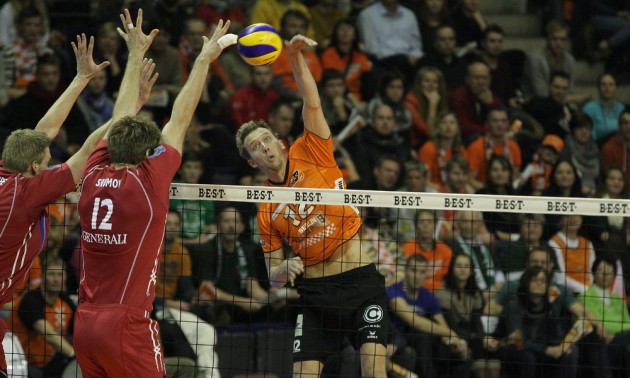 Defeated in their respective last matches in the prelims of the 2013 CEV Volleyball Champions League, BERLIN Recycling Volleys and Generali UNTERHACHING went out to fight for the leading position in the German Bundesliga as they clashed this past Sunday afternoon. BERLIN, unbeaten in their national league’s campaign and qualified for the Playoffs 12 of Europe’s most elitist competition could have strengthened their leading position in Bundesliga by outdoing the Bavarians. Generali UNTERHACHING dropped out of the Champions League after the prelims (but competing in the CEV Cup instead) on the other side could have forged into lead in Germany’s top league by claiming the match themselves.

Not able to put up much resistance, BERLIN had to allow UNTERHACHING to take the first two sets. But 5’248 spectators got see a remarkable race to catch up by the hosts. Lagging behind up to five and seven points in set number three and four BERLIN fought back and eventually claimed both sets. Electrified by an awesome crowd at Max-Schmeling-Halle, BERLIN proved strength of nerve and finally took the match. “We made too many mistakes at the beginning and just with having our backs to the wall we – together with the spectators supporting us – played ourselves up into frenzy”, Robert Kromm said afterwards.

Whilst the European competition is already in its traditional Christmas break, BERLIN still got two national league matches to play with the clash with VfB FRIEDRICHSHAFEN on December 22 marking a two weeks’ break. The Champions League clash against the clear-cut favorite of this year’s title Zenit KAZAN, however, already casts its shadow before: “We knew we won’t play any easy opponents in the Playoffs. Our draw could not have been more difficult, though”, head coach Mark Lebedew says, adding: “We look forward to the up-coming challenge to play against one of the best teams of the world”.