Dresdner SC's newest star Nicole Davis, USA national team player spoke about Bundesliga and her life in Dresdnen. She had her debut against Suhl. WorldofVolley brings you the latest volleyball news. 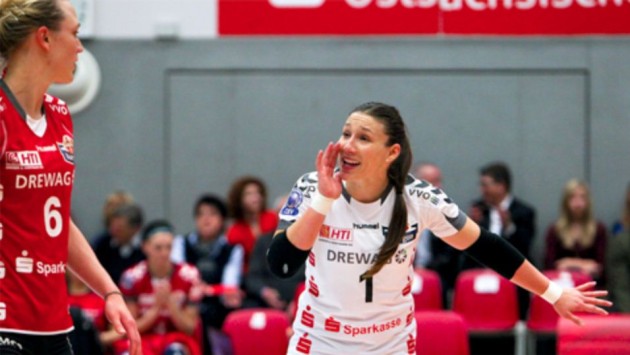 – Nicole Davis, welcome to the Bundesliga. The entire volleyball scene is proud and excited to see such a successful player in Germany. How have you spent the first week in Dresden?

– I feel good. I like the city, I like the girls on my team. This is a good community and we work together well, they are all very talented players in my new team. What can I say: I’m just happy.

– You had your debut in the Bundesliga against Suhl. How satisfied are you with your performance and the performance of the team?

– I’m happy with my performance. I was nervous before the game because I hadn’t played a few months, it felt like years (laughs). But I’ve had my nerves well under control and contributed to the binding and communication well between me and the others. As for the performance of the team, I feel that we had strong moments, but then a little in between have lost focus. But we have brought the game very well to an end.

– What do you say to the performance level of your teammates?

– They are really fantastic, young and athletic. I enjoy every day of practice with them.

– You played in Turkish and Italian top clubs, you play for USA national team and had certainly other offers. Why did you choose Dresdner SC?

– I had a few options to go to other clubs that I did not not want. After the Olympics i trained in USA to remain fit. Then a call from Dresdner came and I said: Of course! That’s a good way for me to play at a really good level before the summer, and the gathering of the national team. I had no experience with the Bundesliga, but I have often played against the German national team, which is a very high-class team.

– You needed a break after losing the Olympic final?

– After the Olympic final we had 14 days off and I then immediately started training. But it was true that I needed a little more time. It was good for me, I learned about different perspectives.