In the eagerly-awaited opening duel in Pool II, both teams proved to be up to the challenge as Germany edged Russia in a thrilling match 3:2 (25-23, 25-23, 26-28, 20-25, 15-10). German Julia Schäfer topped the scorers with 23 points, including two aces. Team Captain Steffi-Martha Kuhn helped the winners with 17 points. On the other side, the most efficient Russians were Taisia Konovalova and Angelina Sperskayte with 14 kills. Read latest volleyball news on Worldofvolley.com. 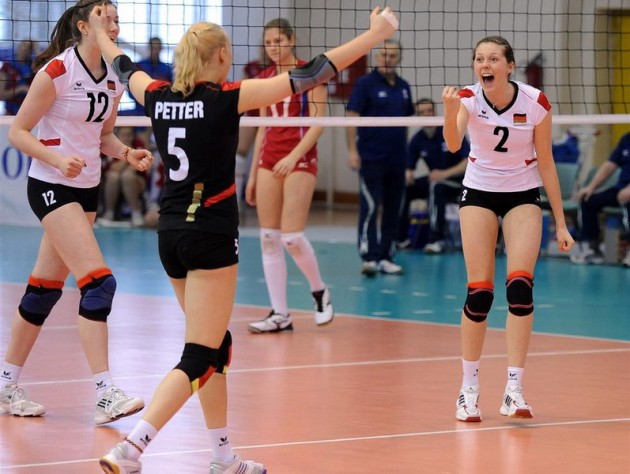 Both teams started the match cautiously, but after a first tie at 5-5 Germany went ahead by three points and reached the first technical timeout with an 8-5 lead. The young Russian talents slowly but surely started to narrow the gap after the break, and they reached a first tie at 20-20. However, Germany managed to hold off the Russian girls and concluded the first set in their favor 25-23.

The teams struggled a lot in the second set, and the young Germans tried to find a way around the solid Russian block. Germany successfully kept up with their rivals for the most part of the set as they managed to turn the score around in their favor at 19-18. Like in the previous set, Jens Tietböhl’s squad was more focused in the finish and, surprisingly, booked a comfortable 2:0 set lead.

Nevertheless, the young Russian talents never gave up. Even as Annegret Hölzig, with a great serve, brought up match point for Germany at 24-23 in the third set, the Russians kept calm and fought back bravely. As a consequence, Russia kept the upper hand at the end of the set by overpowering their rivals 28-26.

The momentum stayed on the Russian side in set No. 4 as the Russian powerhouse turned the tables in the middle of the set. Taisia Konovalova put a lot of pressure on the German passers to make it 16-15 at the second technical timeout. It was the turning point of the fourth period with Russia never looking back (25-20).

However, it was not good enough. Germany bounced back in the fifth and deciding set. At 8-11, Russian head coach Yury Shchuplov called his ladies off court for a serious chat. But it was already too late as the young Germans sailed to hard-earned, but well-deserved 3:2 victory.

Steffi-Martha Kuhn, team captain Germany: “It was a very emotional match. We were good in block, and our service game worked fine. That was our main advantage today. This is an excellent start for us, and we are looking forward to playing even better in the following days”.

Anastasia Cheremisina, team captain Russia: “We were nervous today. That’s all I can say. I hope that we’ll do better in the future”.

TUR M: Arkas Spor and Halkbank will play for the title