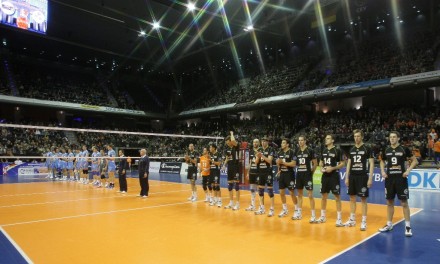 As the side that last season made it to the Playoffs 12 of Europe’s elite competition wants to strengthen this compartment, the 21 year-old Serbian national player is not only going to replace Ricardo Galandi who announced his intention to retire from competitive sport at the end of the past season. The 205 cm tall Serbian international is supposed to raise to unprecedented heights the blocking skills of the team thereby supporting the likes of Tomas Kmet and Felix Fischer.

“We do believe that by signing Srecko we can significantly improve on this fundamental” Club President Kaweh Niroomand says. The 24 year-old Galandi will nevertheless join the team in case of need.

Whilst head coach Mark Lebedew had already extended his contract earlier this year, Paul Carroll (opposite), Tomas Kmet (middle-blocker) and Martin Krystof (libero) have decided to stay with the Recycling Volleys until the end of the 2014/2015 season. Aleksandar Spirovski (opposite), Roko Sikiric (wing-spiker) and Felix Fischer (middle-blocker) have also decided to spend another year in Berlin. Robert Kromm, Scott Touzinsky (wing-spiker), Kawika Shoji and Sebastian Kühner (setter) had all already signed for the 2013/2014 season.

With an option to come back to Berlin, wing-spiker Björn Höhne will play next year for TV Ingersoll BÜHL, the team that was ranked fourth in the last edition of the Bundesliga. Youngster Ruben Schott (wing-spiker), who joined the team in January, will also play for the side of head coach Mark Lebedew.

To read more news from this country click on Germany.

Check out players` biographies by clicking on WoV Community profiles.

See more information about this club on Berlin Recycling Volleys.