After losing 2:3 to SC POTSDAM in the Bundesliga, Germany’s Aurubis HAMBURG is bound for Slovakia to play there the return game of their tie with Doprastav BRATISLAVA in the second round of the 2014 CEV Volleyball Challenge Cup – Women. Last week Aurubis won only 3:2 their home game at CU Arena as the players mentored by Tomas Varga showed a good performance waiting to play before their home audience on Tuesday. 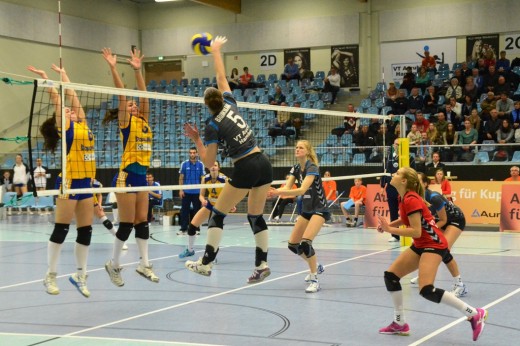 Aurubis will have to pressure their opponent right from the start and perform well in block and attack in order to bring it home and make it to the next round.

The longer the rallies the better is the performance showed by Doprastav so Aurubis will have to try to close it out quickly to avoid that risk. Anika Brinkmann was the top scorer for HAMBURG last week in Germany and she will try to repeat that same performance also in the away match in Slovakia’s capital city. Jennifer Pettke did perform well in the Bundesliga game with SC POTSDAM and she shall be another force to reckon with on Tuesday.

“I am pretty sure we can make the next round if we play our best in Bratislava” says Aurubis head coach Helmut von Soosten. The Germans want to avoid the so-called golden set which would be played in case Doprastav claims the return game with the score of 3:2.