This coming Tuesday Dinamo KAZAN will challenge the Romanian rookie of the 2014 CEV DenizBank Volleyball Champions League Stiinta BACAU that in the previous round came from behind to beat Swiss Volero ZÜRICH (3:2) and claim a historic victory. That match is really crucial for the Russian champions not only to shore up their leading position in their Pool, but also in terms of getting ready for the important match against Dinamo MOSCOW in the Russian Superleague. 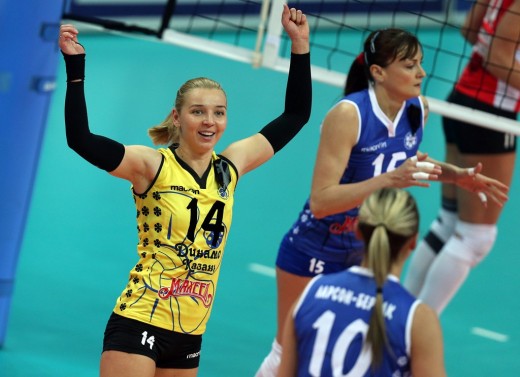 That match is really crucial for the Russian champions not only to shore up their leading position in their Pool, but also in terms of getting ready for the important match against Dinamo MOSCOW in the Russian Superleague.

Both Dinamo KAZAN and Stiinta BACAU are leading in their respective national leagues. Last weekend, the team from the capital of Tatarstan edged VC TYUMEN 3:0 at home. Antonella Del Core became the top scorer of the Russian team registering 17 points.

“We made mistakes, but, you know, we are not machines. It is important not to make them in major matches. One of them is waiting for us on Tuesday night. I haven’t seen Stiinta BACAU but that team has several players I’m familiar with. It is vital for us to play high-quality Volleyball because on Saturday we will clash with Dinamo MOSCOW in one of the most important matches in the Russian championship”, said the Italian receiver.

Before this season, KAZAN and only two Romanian clubs crossed their ways in the European Cups. Kazanochka KAZAN lost to Unic LPS PIATRA–NEAMT at the “golden set” in the Challenge Cup Round of 16 in the 2007/2008 season.

One of Stiinta BACAU’s players – middle blocker Alexandra Sobo – was there already some years ago. Dinamo KAZAN defeated Romania’s 2004 Tomis CONSTANTA twice with the same score (3:0) in the group stage of the 2013 CEV Volleyball Champions League.

The captain of the Argentinean national team – Emilce Fabiana Sosa – is holding the title of top scorer for the side from Romania. In the match against Volero ZÜRICH she contributed six effective blocks, and scored a total of 20 points.

It is worth mentioning that Kim Staelens, an experienced setter from the Netherlands, also plays for BACAU. She played 291 matches for the Netherlands national team and became a silver medalist at the 2009 European Championship as a member of the “orange” team. That time the Italians – including Del Core – prevented the Oranjes from winning gold.