Looking back on a successful start in the year 2014 as the likes of BERLIN Recycling Volleys could first outdid Germany’s latest sensation TV Ingersoll BÜHL 3-0 and then claimed an important 3-0 victory over the current leaders of the Bundesliga, Generali UNTERHACHING, the 2013 German national champions from BERLIN look forward to their up-coming challenge of re-playing Zenit KAZAN in the Playoffs 12 of the 2014 CEV DenizBank Volleyball Champions League (laola1.tv match of the week). 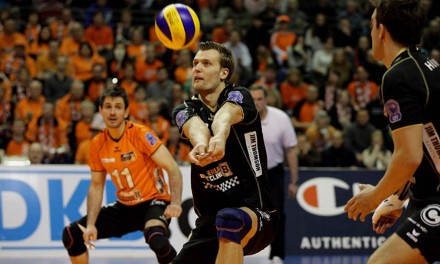 Outside-hitter Robert Kromm, who himself played for Ural UFA in the Russian Superleague talks about his experiences in one of the world’s best Volleyball leagues and his team’s chances against the group from Tatarstan in the following interview.

Robert, starting from your experiences in Russia, what are the differences between the Russian and German Volleyball?
“Russia can summon up a huge pool of talents to continuously develop superstars such as KAZAN’s Maxim Mikhailov and BELGOROD’s Dmitriy Muserskiy – so there is definitely a reason why Russia could claim gold medals at both the Olympics, the World League and the European Championship. Accordingly, the Russian Superleague is one of the strongest leagues in the world, if not even the best. What’s more, Russian clubs often can rely on an enormous budget so that many foreign top stars such as Zenit’s Matthew Anderson play for Russian clubs nowadays.”

Thinking about last year’s clash against Zenit KAZAN – what kind of memories would you share?
“Last year, we were the underdog – and so we are this year. But this position is exactly what made us play easily and unburdened. Once we gained the momentum, KAZAN had difficulties to sustain our pressure. Unfortunately, we were not able to keep up the consistency to eventually take the win.”

Talking about tomorrow’s match against KAZAN, how do you see your chances against Zenit?
“I’m sure, this time it’s going to be different. We are all fit and ready. We are hell-bent on revenge. That’s why I think there is a chance for us to claim a victory in our home match.”

GER: After many ups and downs Friederike...