As in the previous year, Schwerin SC has prevailed in the final against Dresdner SC and defends the German Championship. 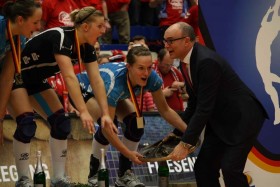 Schweriner coach Teon Buijs said after the obligatory champagne shower: “The girls have done just great, after the title last year, they have highly motivated and continue to make highly professional. . As we have seen during the season that our concept works, they have always trained and played with energy – because I’m proud of it “

Stefanie Karg, captain of the losing Dresdner SC, said:” Schwerin deserve to be  German champion, but that was a dignified finale, a hot game among equals. Despite the defeat I’m proud of my team. “

ITA A1: V-Day just one win away