GER M: Björn Andrae – we were very precise in following our tactics

“It was very hard for us against an opponent who was playing very wisely with the serve,” Tuomas Sammelvuo, captain of Finland, said. ”Germany's offense was excellent too. Finland had its good moments today, but the countless mistakes cost us the victory.” 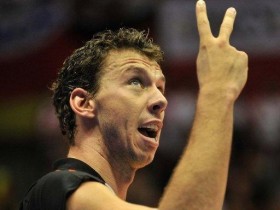 German captain Björn Andrae was pleased with his team’s performance: ”Our team played a really good game today. We won the tough first set after coming back in the result. That made things easier for us. We were very successful in blocking and defense and were very precise in following our tactics.”

“Finland started the game with 100% of its power and energy, but then we suffered a real shock after losing the first set. After that we lost some of our motivation and concentration.”  This is how Daniel Castellani, head coach of Finland, explains the loss.

His counterpart in the German team Vital Heynen had a slightly different explanation:  “I think there was no difference between the two teams today. The result came from a physical standpoint – yesterday Finland played five tough sets against Italy, while we won our first game easily.”