Luckily for the head coach Mark Lebedew, Berlin Recycling Volleys kept their main roster. Jaroslav Skach left the club, and Sebastian Kuehner replaced him. The other newcomer is Robert Kromm. 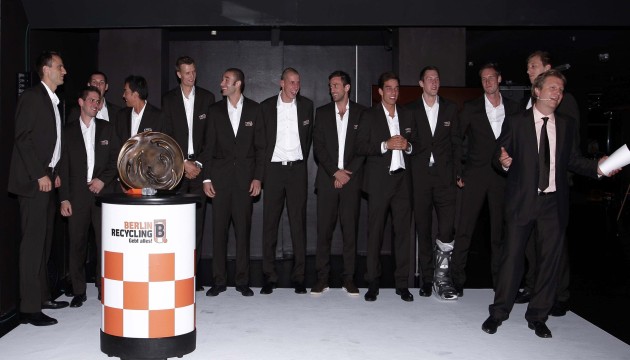 Someone who left the capital is the veteran setter and former captain Jaroslav Skach who has spent more than ten years in the Bundesliga and it was time for him to bid farewell. He will be replaced by the young 25-year-old setter from Mitteldeutschland Sebastian Kuehner (203 cm). The Berlin-born Kuehner will have a supporting role to the starter Kawika Shoji.

The other newcomer this year is actually someone who is not unknown in Berlin and to the German audience in general. The national team player Robert Kromm (played in Marmi Lanza Verona in Italy last year) signed with the champions to replace Urpo Sivula. Kromm was unlucky to stay out of the national team for the London Olympics, so he would surely be eager to show high level of volleyball and earn his place back in Vital Heynen‘s Mannschaft.

The play-off hero Scott Touzinsky, who returned in Berlin in the middle of the last season to lead his teammates through the elimination bracket games, stays in the capital and has even been named the new team captain after the release of Jaroslav Skach.

POL W: Sparta goes to the third round with optimism and hope

GER M: Germans must believe in themselves