Stricken by the flu Generali UNTERHACHING is preparing for another highlight of the season. On Wednesday the Bavarians will be hosting Lube Banca Marche MACERATA in Generali Sportarena for the third leg of action in Pool D of the 2013 CEV Volleyball Champions League – Men. Read latest volleyball news on Worldofvolley.com. 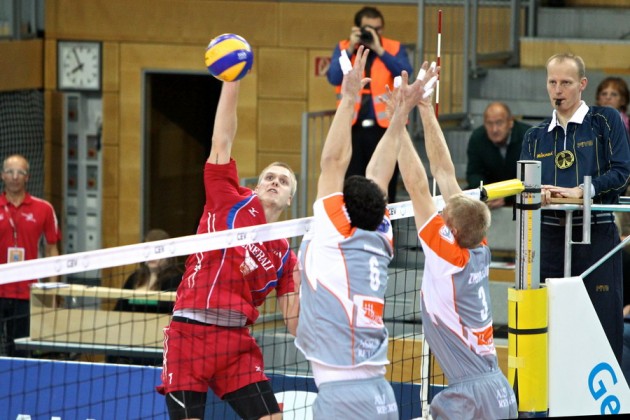 Generali’s head coach Mihai Paduretu is looking forward to a top class match between a teacher and a student, with his team being the latter one. “MACERATA is one of the best clubs in Europe. This will be a match where we can learn and develop” he says.
Secretly UNTERHACHING may be hoping for an upset, having in mind the thrilling cup fight last Wednesday when they eliminated German champions and 2013 CEV Volleyball Champions League competitor BERLIN Recycling Volleys in the first round of the German cup competition.

However, Generali probably will be short-handed for the clash with titan MACERATA. While winning its away game in the German Bundesliga over the weekend at TV Rottenburg with 3:1 (25-18, 25-19, 30-32, and 28-26) Paduretu had to cope with the effects of the flu that has stricken his squad. Regular setter Branislav Skladany and Tom Strohbach couldn’t play and are not expected to be available on Wednesday. Skladany will probably be replaced by Patrick Steuerwald. Captain Christian Dünnes and Matias Raymaekers were given the game off, but are expected to be available against MACERATA.

Despite some problems Paduretu was satisfied with the win in the dress rehearsal for the Champions League match. “We got important points – and nobody got injured. In addition, we played well for two and a half sets. Now we can concentrate on the highlight against MACERATA”, he said. After two legs the Italian champion has a maximum of six points while UNTERHACHING will come into the game with five points from its matches with ACH Volley LJUBLJANA and Euphony ASSE-LENNIK.

For Generali’s Matias Raymaekers and Jan-Willem Snippe, who were signed by Paduretu this summer, the match will turn into a meeting with some old friends. Both did play for MACERATA in the past, after their arrival in UNTERHACHING they have already become extremely valuable players for their new club. Snippe, who won the Italian Cup with MACERATA in 2009, however is a little bit skeptical when asked about Generali’s chances on Wednesday. “MACERATA is playing on a top level. This will be a very difficult match for us, a real challenge. We will give it everything to make it as hard as possible for MACERATA. We must serve well and act extremely well on block and defense”, he says.

The Italian champion brings a glamorous resume to Bavaria. Two Italian championships, four Italian cups (the last one in 2009), three titles in the CEV Cup (the last one claimed in 2006), one Challenge Cup win – and of course they also won the CEV Volleyball Champions League in 2002 and qualified for the Final Four tournament in 2007 and 2009.

MACERATA has been playing together for a while and is loaded with elite players. The three Serbs Dragan Stankovic, Sasa Starovic and Marko Podrascanin became European champions in 2011 and took part in the 2012 Olympics in London. In addition, there are five Italian national team players in the squad. Only diagonal Starovic and libero Hubert Henno from France are new to the team. Henno already visited UNTERHACHING during last year’s CEV Volleyball Champions League season while playing for Bre Banca Lannutti CUNEO.
MACERATA won its dress rehearsal against league opponent Sir Safety PERUGIA (3:0) and is unbeaten this season. Head coach Alberto Giuliani however doesn’t expect a stroll in Unterhaching no matter being declared the favorite by the hosts. “I think this will be a tough match. It is a match that can mark a turning-point regarding the lead in our group. It won’t be an easy task to get three points”.