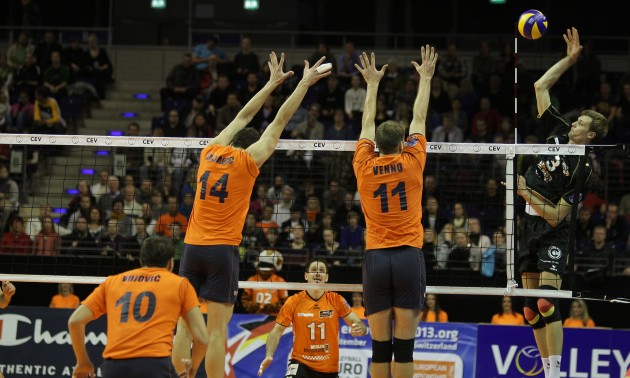 The side of BERLIN started out confidently, establishing an early 8:4 lead. With huge blocks by Tomas Kmet and Felix Fischer and powerful hits by Robert Kromm, the best scorer of BERLIN with 19 points, the hosts did never allow BUDVA to close the gap and could eventually claim the first set (25-16). “We played great there”, team captain Scott Touzinsky said afterwards. “But we lost our focus in the second set”, he concluded.

And indeed, BUDVA had the better start in round two (2:4) and henceforth, 3’875 spectators got to see a tight second set at Max-Schmeling-Halle. Although BERLIN steadily fought back, BUDVA did not slacken its grip, taking the lead at 10:12. Not able to make up for the lost ground, BERLIN lost the second set (20-25).

Also in round three, BERLIN did not find its rhythm (3:5). Both teams fought devotedly not allowing the other side to pull away. A service ace by Felix Fischer marked the first two-point lead of the hosts (13:11) and it was again the middle-blocker who took his team to a set-winning 20:16 lead.

After claiming the third set (25-19), BERLIN started out as powerful as they had begun in the first round. A service ace by Tomas Kmet marked the 5:0 lead and his team further pulled away (8:2). Captain Scott Touzinsky contributed the 20:12 lead with a clever hit. BUDVA was not able to put up more resistance and was overrun by the hosts who claimed the fourth set (25-13) and left their coach confident for the up-coming away match in BUDVA.

#IAMINBERLIN: Bookmakers – Zenit is going to...