A.O. Foinikas Syros made a break in the the semifinals of the Greek playoff by defeating away Olympiacos O.S. Piraeus in a tie-break, in the first game of the series. 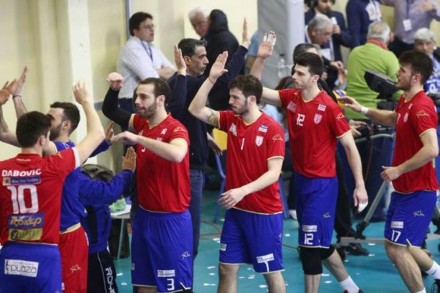 The „Reds“ will seek the equalizer on Tuesday (April 14) in the second match which will also be played on their court. If Foinikas wins again, then it will have the chance to claim qualification victory to the finals on Friday (April 17), at home.

Foinikas turned the game in its favor mostly thanks to the blocking – it earned 17 points in that segment in total.

Tomislav Dokić was unstoppable in the winning team with 32 points. Wytze Kooistra scored 25 in Olympiacos.

P.A.O.K. Thessaloniki with the service as a weapon and with the duo Gómez (25 pts.) and Jiménez (20) in the mood took the victory against Panathinaikos A.O.  (3-1) and equalized the semifinal series at 1-1.