Italy confirmed its ambitions and posted an incredible victory, going from 0:2 to 3:2 to overcome Germany in Turin’s PalaRuffini in the second World League 2013 meeting. This and other volleyball news read on Worldofvolley.com. 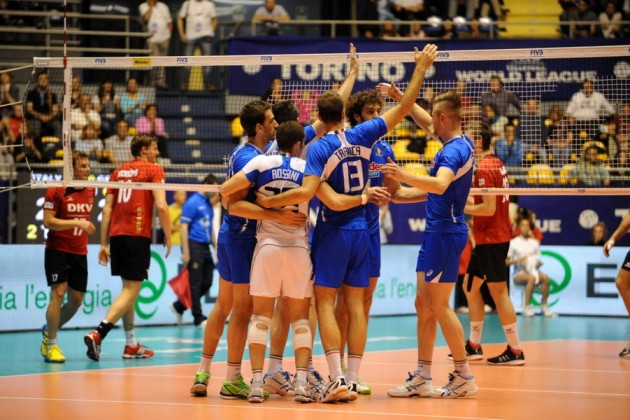 The Italian side celebrate

The top scorer for the match was Ivan Zaytsev, the Italian opposite hitter who scored 27 points and recorded 49% on attack. On the German side, Kaliberda scored 22 points.

The match started with a balanced first set. Both the Italian and German teams answered with points. Germany led the game 7-8 until the first technical time-out, taking advantage of Italy’s mistakes. Italy managed, however, to pick up the pace and lead the game with a score of 9-8.

The set continued with a great balance when Collins took the lead for Germany on the score of 13-14. At the second technical time-out, it was still Germany who led the match with a score of 14-16. Bohme’s block seems to awaken Germany, and coach Berruto had no choice but to call a time-out when the score was 15-19. An offensive mistake and a block of Briarelli and Parodi changed the trend of the match. Zaytsev hit a cross-court shot, and Hone’s spike went out, narrowing the score to 19-20. When Germany led the game 21-24, Savani managed to make a kill, but Collin ended the first set with a score of 22-25.

Germany did not leave Italian team any space at the beginning of the second set with a score of 1-6. Italy tried to come back in the game with Birarelli (5-9), but two offensive mistakes left Germany ahead with a score of 5-11.

Collin’s blocks were hard to overcome and Heynen’s team led the game with a score of 8-11. Italy tried to pick up the pace and managed to narrow the point difference (12-15).

After the technical time out (12-16), Parodi seized an opportunity, but Germany still led the game (16-18). Baranowicz’ block, substituting Travica, narrowed Italy’s points difference, but Collin and Fromm took the lead of their team (17-21). Collin and Kaliberda helped Germany maintain an overwhelming score until the end of the set, which concluded 21-25.

Italy came back in the third set with much more concentration and, thanks to Zaytsev, took a 11-7 lead. Parodi’s shot forced Heynen to call the time-out (12-7). Zaytsev and Parodi showed a display of aggressive attacks, and Beretta’s block on the Germans attack made the score16-9. Beretta proved to be the leader towards the end of the set, thanks to his shots that let Italy overcome Germany (20-12). Fromm could not manage to narrow the point difference, and Italy won the set 25-17.

There was great balance during the 4th set, although Germany tried to close the match, while Italy attempted with great strength and determination to get to the tie break. Zaytsev and Collin became the leaders of their respective teams, and they reached a break-even point (13-13). Germany tried to cruise to victory when the score was 19-21, and the match heated up. Italy managed to tie the score, thanks to the supporters and Birarelli’s block that took Italy to 23-22. The set final scorer proved to be Zaytsev, whose shot posted the win of the 4th set.

The tie-break started with the same trend as the fourth set. Ivan Zaytsev seized the opportunity and gave the Italian team the first three points. Italy continued leading the match (7-1) with Savani’s cross-court shot and Parodi’s block (8-1). Germany tried to spread Italy’s offense, in vain. Thanks to Savani’s shot, Italy secured a 15-6 win.

BRA M: Dante – “At this level we have to make fewer mistakes“

ITA M: Trentino got new opposite