Trentino Volley closed the summer market of 2013 with the hiring of Dávid Szabó. 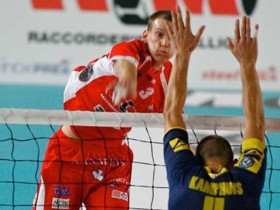 The Hungarian opposite, born in 1990, will complete the squad available to coach Roberto Serniotti for the season 2013/14 filling the last empty spot in the roster previously occupied by Gabriele Nelli who will be free to go to Under-20 Trentino team.

Szabó is back from his experience in the Austrian league, and he came to Italian and World champion after careful evaluation of the 2 available players in the market.

Szabó was on a probation period in the last two weeks and he has finally convinced the leadership of Trentino to sign a one year contract with the Hungarian.

Szabó will be the alternative to Sokolov. Despite his young age, he is preparing to compete in the fifth season of his career in Serie A1 where he made his debut in 2008 with Verona after a year spent in A2 league with Mantova.

Then his Italian adventure continued in Treviso and Belluno and then in Slovenia and Austria.

His former Austrian club Hypo Tirol Innsbruck was defeated by Trentino in a friendly thanks to his 14 points.

Trentino already has a good experience with the Hungarians – Dömötör Mészáros was a member of this club between 2001 and 2003.

Szabó has an respectable international resume: behind him there are already two Champions League participations, the victory in the CEV Cup in 2011 with Treviso, a trophy in Hungarian league and Cup in 2006 with VRC Kazincbarcika, the team where has grown.

RUS W: MVP Tatiana Kosheleva – “These tittles are the most expensive gifts in life”