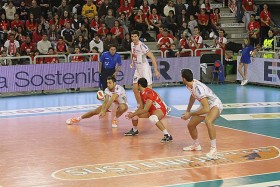 Trentino made the first step towards its third league final by defeating Latina in semi-final game 1. In front of 2500 fans, the encounter went similarly to the one played just 11 days earlier in the regular season. The Italian champs remained focused at all time to win over an opponent that had got rid of Belluno and Modena in the previous round. MVP: Matey Kaziyski (75%, 3 blocks, 4 aces and a total of 19 points).

Osmany Juantorena (Itas Diatec Trentino): “It’s a great result, we felt a lot of pressure on at the start but we immediately played strong. Latina served well and managed to make it difficult for us at the beginning then we got better and got this first important point of the series”.

Carmelo Gitto (Andreoli Latina): “We lacked conviction and quality in the play. In the first set we did very well to keep it tight while we started off the second without energy, we let it go. We hanged on until halfway through in the third, then Trento created a gap and we couldn’t come back”.

Cuneo won the opening game of its semi-finals in Osimo. Macerata has no choice but win on Sunday to keep its hope of making it into the final. MVP: Grbic.

Alberto Giuliani (coach Lube Banca Marche Macerata): “We lost quality in our serve bit by bit as the game wore on, we made a lot of mistakes, and the team struggled to receive their average serve. They played a very good game, and when you fall behind that much in the scoreboard like tonight, it’s always tough to come back. We’ll have to forget about this loss and go to Cuneo knowing we’ll need to perform at a whole different level. Better reception and determination on a consistent basis will be needed”.

Camillo Placì (coach Bre Banca Lannutti Cuneo): “The turning point was the first set, in which we started off very poorly considering our level. We were playing in a whole new gym, the many mistakes made in reception and serve just go to show that Macerata was not used to the court either. At the end of the day, they only trained here one more time than we did. The positive thing we did is to hang on when things were not going smoothly for us before stepping up in the second set. But it’s not over, we have to remember that”.

OFFICIAL: Another American in Conegliano