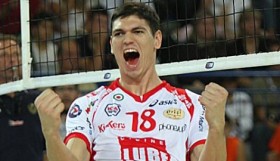 Marko Podrascanin (Lube Banca Marche Macerata): “We are very close to accomplish the mission we had at the end of the World Cup break: that is to say limit the damage due to the fact we don’t have time to train and try to win all the games until the end of the year. This one is the toughest one, Belluno is a great club with excellent potential. They’re coming off a defeat against Trento, so they will want to bounce back, but we really want to end the year on a high”.

Roberto Piazza (coach Sisley Belluno): “Macerata is another good test for us because we have to improve in the clutch moments of games. We’d better learn quick because these teams make you pay when you make mistakes. Macerata is a very similar team to Trento, which we played the other day, physical and powerful with a game based on a strong serve. We’ll have to be at 100% as usual, we don’t have any choice, and try to get the points we almost got against Trento, more because of our mistakes at the end of sets rather than the strength of our opponents”.

ARE YOU SERIOUS? Kaziyski’s propeller spike on...