Modena have been waiting for this day exactly 14 years! 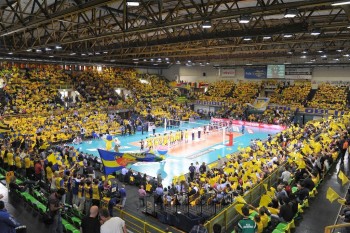 May 8, 2002. Modena defeated Sisley Treviso in Game 4 of the Serie A1 Finals and clinched their 11th domestic title… Their last domestic title until this day!

It was a pretty strange season for the Yellow crew. They finished the Regular Season at the 4th place, behind Parma, Treviso and the 1st placed Lube.

Modena had slight problems in the quarterfinals against Milano, but they eventually prevailed by 3-1 in wins. While then, instead of facing mighty Lube in the semifinals, Modena ran into Ferrara, which shocked the leaders of the Regular Season by eliminating them in 5 games!

Modena had no problems against Ferrara as they closed the semifinal series by 3-0 in wins. It was time for the big Finals against Sisley Treviso… The Yellow crew prevailed after a great battle (3-1 in wins), while they won the title on the very this day 14 years ago!

Today, after so many years of waiting, Lorenzetti and his men have a big chance to finally break the curse and win the championship title once again. They are leading 2-0 in the final series against Perugia, while the Game 3 is about to start in one hour (17:30 CET).

Will they write a new chapter in the history of the Yellow city?

ITA W: One player leaves and one...